We had a great team of colleagues and friends ready to run and bike the inaugural KM Duathlon - Tristan, Rob, Mark, Mark, John, Guy, Greg, Glen, Francois and me. Many of us even had fancy new kit from our triathlon club at work. New kit and an impressive start from the organisers including a fabulous race pack delivered to my door made it look like it was going to be a good day.

On the eve of the race, after having bathed and tucked the children into bed. I prepared my SLS3 kit (the same one as I wore for the last duathlon!), my bike, drinks, food and put running shoes, change of clothes, spare tire, extra food and a few other things into my roomy transition bag. Then, my husband and I went out to dinner with friends, including Tristan and his new wife.

The day itself started well - up early, quick bite to eat, drinks out of the fridge and a very steady 20km cycle to the start of the race as a warm up. The transition area was spacious and well signed, there were plenty of toilets, lots and lots of marshalls and the music was already playing. I saw a few of my team mates and other friends, set up my bike, with my Julbos in my helmet ready for after the first run, dropped my bag then went to the start line. I had decided to wear socks - the transition was all of even, clean tarmac and the distances were just that little bit longer so, even though I don't usually wear socks for multisport races, I thought it would be a good idea today. I was feeling a little tired and hungry already... not a good sign...

The relay teams, KM30 and KM60 were all started together. After a fairly good 5km, I was feeling quite relaxed and enjoying myself. Then I felt a sharp pain in the bottom of my abdomen, right down near to my hip. I slowed down - significiantly. The second half of the first run was quite a lot slower than the first - eventually the pain went - and I was in third place coming into T1.

T1 was good and fast and I was back out enjoying the bike leg in no time. The route was straight, flat, shaded and my bike felt easy going fast. I could see at each u-turn that I was catching up with the two women in front of me. At about 33km into the bike leg, I passed Winona and went into second place, but then another, different woman overtook me! Back into third...

Coming into T2, I felt good, took my feet out of my shoes, kept pedalling, just before the dismount line I stood up and swung my right leg backwards over my bike ready to jump off and run back into transition... then I was flying through the air and landed on my head. I didn't move for a few seconds, my toe hurt. Then I realised that my arm and shoulder also hurt, and my hip, and my hand, and my ankle... I felt a bit disorientated, a little dizzy and mainly because of the pain in my toe, I decided to stop my race there. 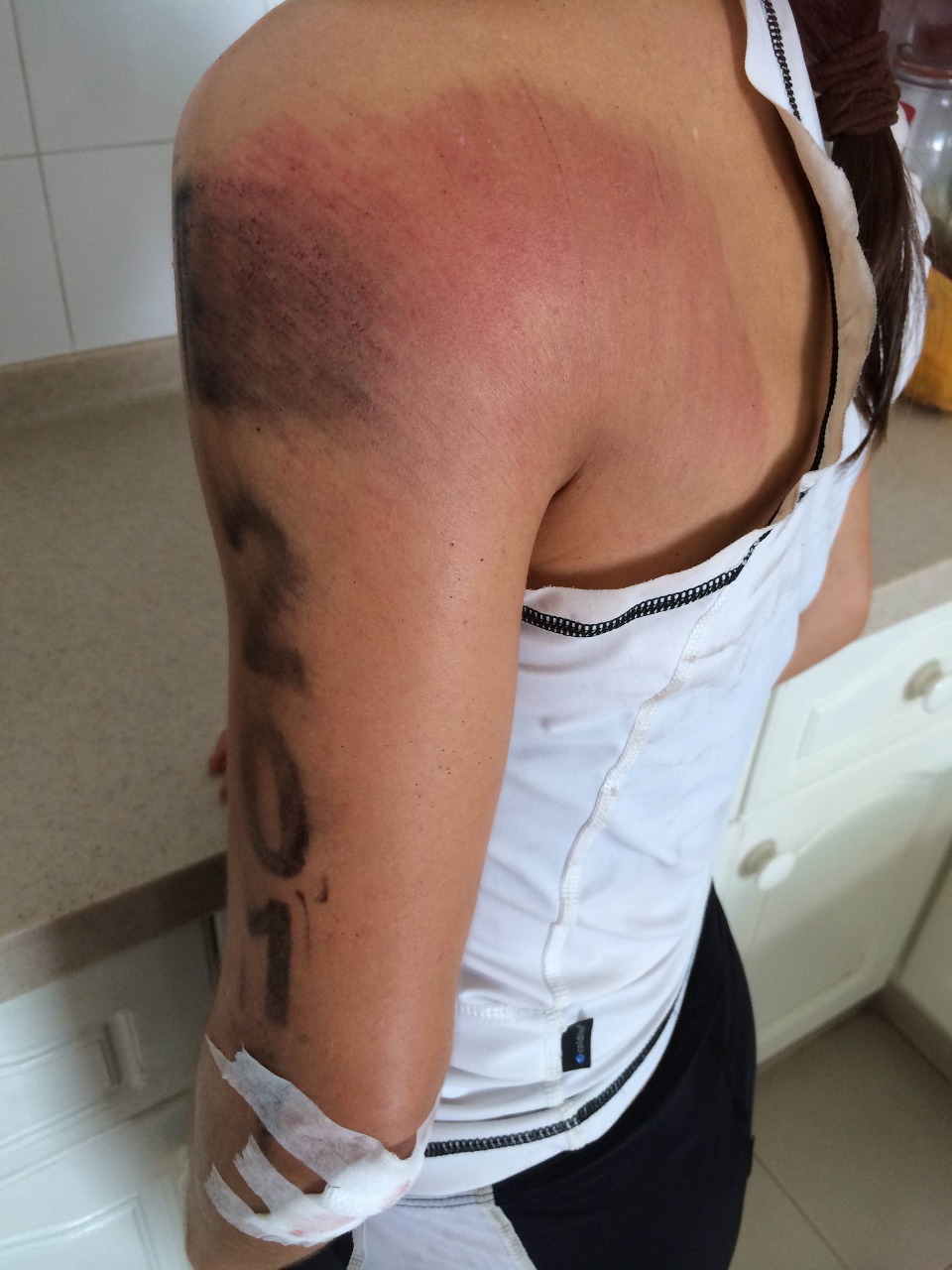 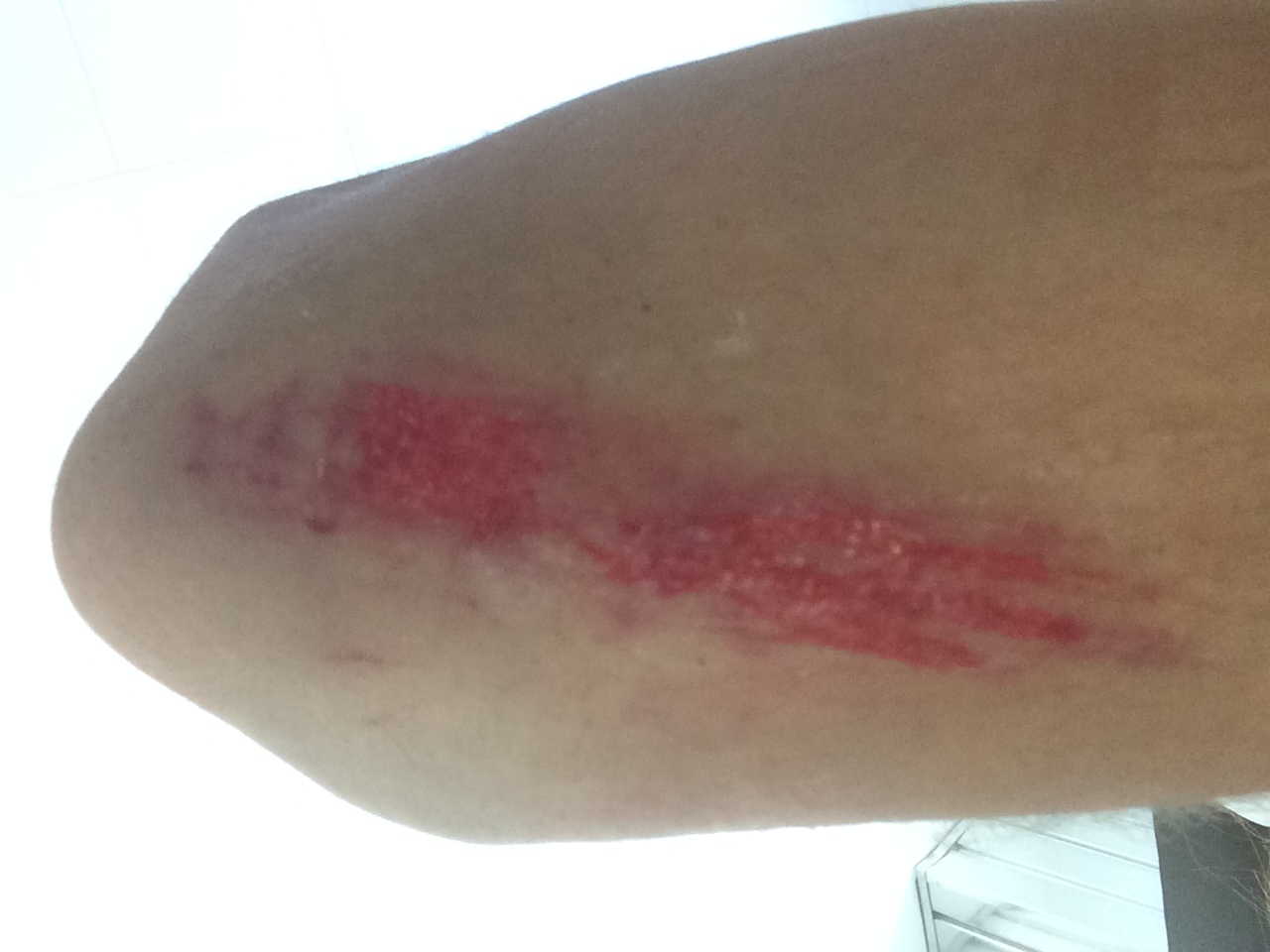 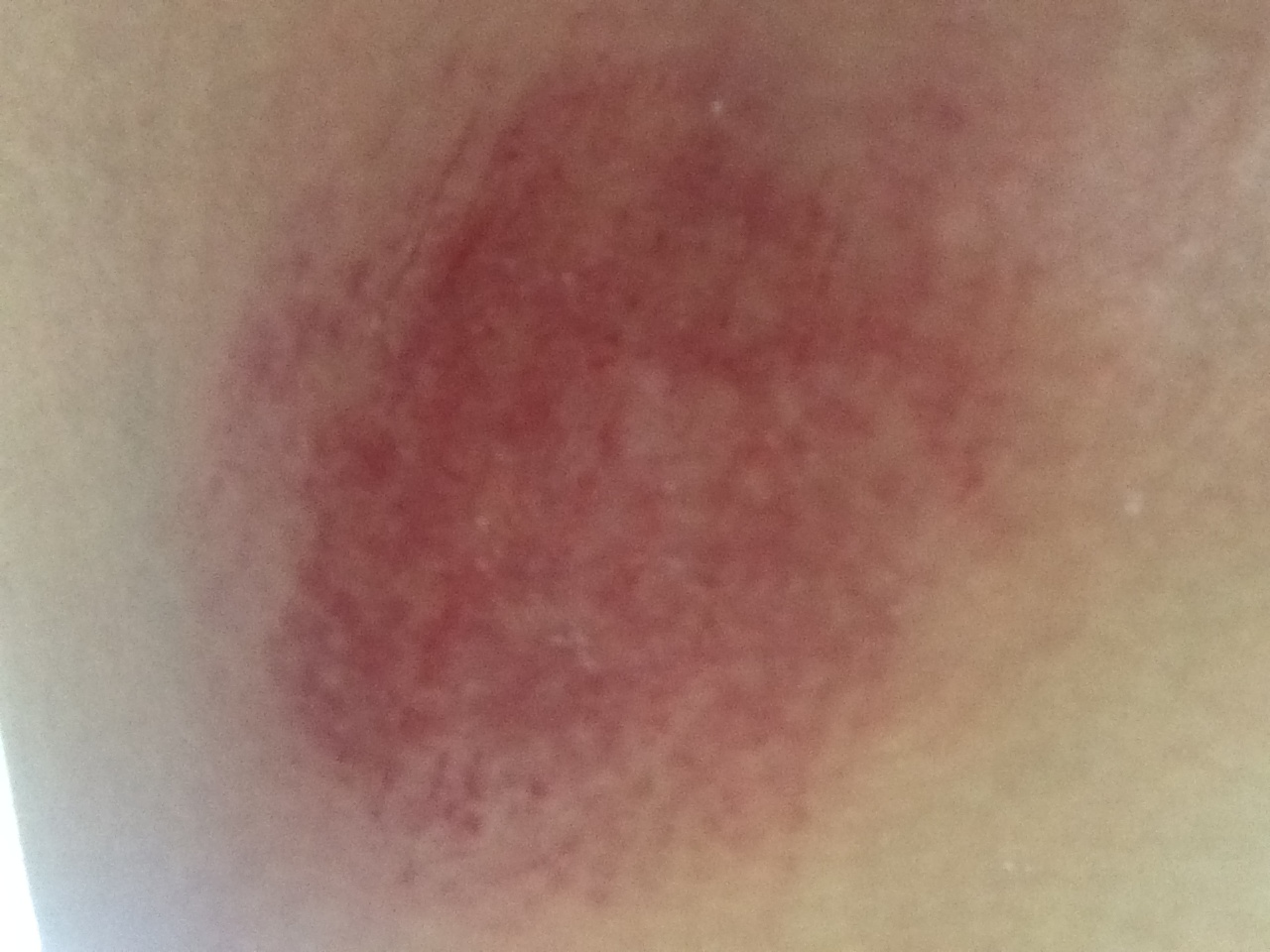 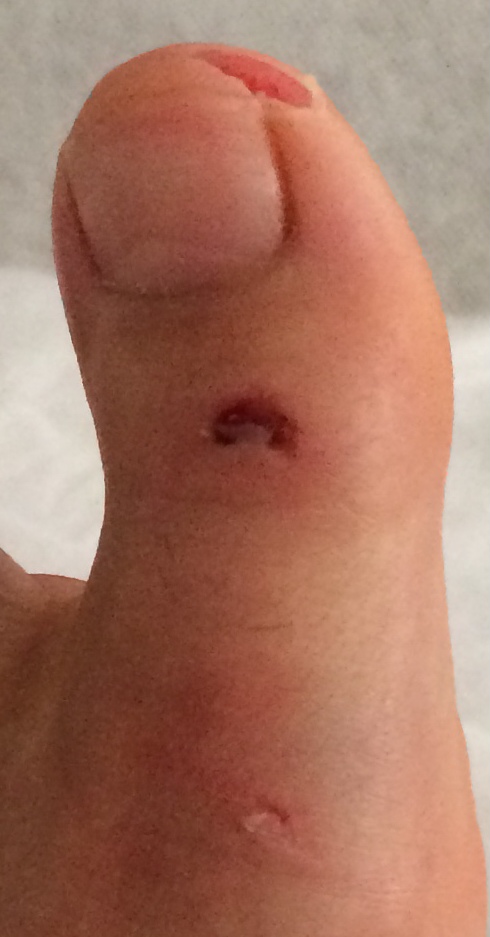 I think that I hurt myself as i swung my right leg over, standing on just my left foot, my foot slipped off of my bike shoe on to the floor still moving quite fast  - hence the chunk taken out of the end of my left toe and the shredded socks. I'm not too sure how I ended up in the air, upside down and landing on my head and my back. I do know though, that I would have been in a much worse state if I had not been wearing a helmet. It took most of the impact as I landed and smashed, cracked in several places all the way though.

I love my feetures - they are the best socks in the world.... but they will only be coming out of my drawer now for single sport  training and races. Socks just do not belong in multisport races. Of course, Coach Ben has already told me this many times.

Mark M ran out of transition as I was still sitting, dazed, near the dismount line. He came over to make sure I was OK. I told him I was, and to get out there and finish off his race! I hobbled over to the medical tent, where I was well taken care of then got my bag and walked back to the run course to cheer on my team mates. Francois did a fantastic job, coming in 5th or 6th overall! I saw John finishing strongly and the two Mark's making it home it good time!
We found a table and got some food and cold drinks. Guy soon sat down with us too, then a few minutes later Rob appeared. Francois kindly offered to take me and my bike home so I didn't have to cycle back, so we left before the prize presentation.
A couple of hours later I received this photo and a message telling me that we had won the team competition! This meant, $2,500 for our chosen charity - awesome job guys!
So overall not such a great day for me, but a fantastic day for the team and for Seeing is Believing.
The KM Duathlon was well organised, not crowded, the prizes and kit were good. I'd do it again!
**Late Edit**
Now it's late enough for my Mum not to worry...
After having spoken to a few people in the days following the race, I am pretty sure I was unconscious for a few minutes after I fell.
I was a fair way ahead of Mark and John on the bike. They said that they (and many other people) passed me with their bikes while I was still laying on the ground. They stopped and tried to check if I was OK but were moved along because they were blocking the path into the transition area.
I remember falling, then getting up and out of the way almost immediately and seeing Mark running out of transition. I don't remember lying on the ground for any time at all after having fallen and certainly don't recall a single person coming past me while I was on the floor.
I was diagnosed with concussion and whiplash - which explains the nausea and confusion. It felt like I had morning sickness for most of the 24 hours after the race and I genuinely could not remember if it was Saturday or Sunday.
A lesson from this: WEAR A HELMET.
Wear a good one. Wear it even if you are only going slowly (I think I was probably moving at about 5-8kmph). Wear it even if there are no cars near you. Wear it even if there are no other bikes near you. Wear it even if conditions are good and you think you're not going to crash. Wear it for every moment you are on your bike. Make anyone you care about wear one too.