What a weekend! Three days away with the boys at the beach - lovely weather, great food, lots of sleep... and there just happened to be a race happening the same weekend! 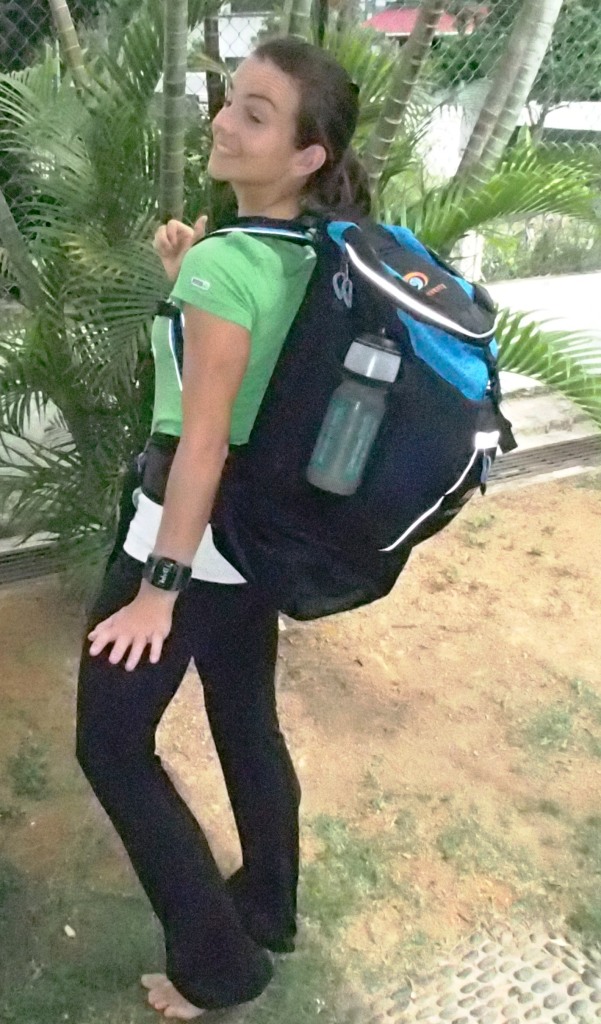 Friday morning we were up early, bike and bags into a taxi to the ferry terminal. The boys were excited to see the boats and loved watching the ships out of the windows once we were moving.

Once we were in Bintan, we got straight onto a coach and when we arrived at our hotel our room was ready early at just gone 10:30am. After a wander around the beach, playing, lunch and a nap we went to collect the race pack and check out the set up.

After dinner, the boys went to bed and I went to the race briefing. It was the best race briefing I have ever listened to. The diagrams on the slides were very detailed, the explanations were clear and covered all of the things anybody would need to know, yet it wasn't too long… still managed to get to bed early.

The Saturday morning felt strange. I've never started a race in the afternoon before, so I didn't really know what do to with myself... perhaps I should have done the sprint distance race to keep myself occupied for the morning?! We had a relaxed morning, playing in the pool mainly and remembering to keep well hydrated, sipping my bottle of elete electrolytes all morning, then I cycled with my blueseventy bag to the race area at about midday to set up everything and prepare for the race!

The transition set up was pretty standard, my row was right at the end so quite easy to find. While I was sorting out body marking and bag drop I saw lots of familiar faces - by the time I had chatted to friends and worked out the ins and outs of transition it was time to go to the beach. There were jellyfish warnings all over the beach, but there was also a team, called J-watch apparently, scooping them out of the water and patrolling the area. Nobody had been stung during the earlier sprint race so that gave us some comfort...

The men's wave was huge, lots of white water and a huge tail of people walking into the water at the back. Fifteen minutes later it was our turn. 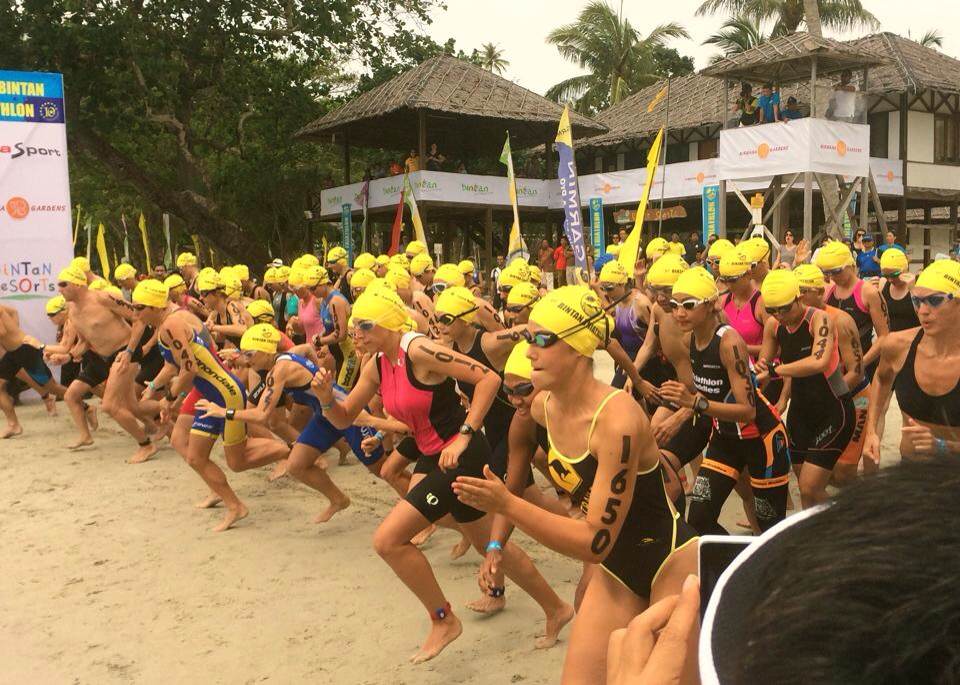 After getting a foot in the face right at the start, on the stretch out to the first buoy I went massively off course - I reckon ten metres or so. Not a great start.  I got back towards the buoys and followed the rope for the back straight, then into the beach for the turn around was fairly straightforward although I was convinced I was last and trailing way behind the pack. On the beach I overtook one woman who was walking out of the water... phew - one place regained! I couldn't see anyone in the distance when I got back in though. I passed a few men swimming slowly and then just after turning at the last buoy I swam over a jellyfish! My heart rate shot up, my stroke rate quickened, but I managed to tell myself that I couldn't just sprint all the way back in and calmed down; I was still a far way out at sea. Again, I was sure I was way off course. There was nobody around me at all and it was really hard to see where I was coming in to transition because there were so many people on the beach obscuring the path to the bikes. It even crossed my mind at one point that the reason I had seen the jellyfish was because I was that far off course! I just aimed for the nearest part of the beach - thinking it would be quicker to correct the route by running a bit further than it would be by swimming further.

I was seventh out of the water. Not last, but not really where I wanted to be either.

The first few hundred metres on the bike were up a steep hill. I had noticed this (and been told in the race briefing) so my bike was in the right gear for it, but it still wasn't easy! We made our way out of the resort onto the main roads and then opened up. The bike course was fantastic - undulating, green, good road surface, not too crowded and not too much traffic. I loved every second of it. My N-Gen on Maxxis Campiones felt great and so did my legs! For a little while I was on one of the few flat stretches and on my own... I kept thinking of the footage of Chrissie Wellington speeding along alone on her bike in Kona in 2011. In retrospect I'm pretty sure that's not what I looked like (and nor was there much similarity in pace) but at the time it was a very motivating day-dream!

At about kilometre 30 a very friendly Filipino overtook me and kindly informed me that the elastic band on my shoe was still attached to my bike! I had felt something funny going on with my right foot, but I had dismissed it as fatigue from the rolling hills. I broke the elastic with my hand and then a couple of minutes later passed Winona Howe. I seemed to be getting a lot of attention from the people on the motorbikes (I assumed all were draft marshalls). Just before we came back into the resort, Dillon, one of the  Metasport  coaches pulled up very close beside me and took his pen out of his mouth as if to say something. I was thinking "I didn't! I counted! I wasn't drafting! No way!" - and then the motorbike pulled away again.  When I saw him after the end of the race he told me he'd said "good riding!"... man scared the life out of me!

Back into the resort, past the bike depot I started undoing my shoes and got one foot out onto the top. That'll teach me for not looking at the route map properly. We got waved on past the hill and down for another 1km of up and down before a u-turn and then, only then, back down the hill to transition. Luckily I managed to get my feet back into my shoes pretty quickly and completed the last little bit with no problems.

When I ran back into transition was that there was only one bike already there! Kath's bike... as expected. I was pretty happy about that! Quick as a flash (the fastest T2 time of the race) my 3-sums were on and I was running out of transition again along the beach. It felt like perhaps I had enjoyed myself a little too much on the bike, especially when we came off of the beach and the hills started! I never really found my legs on this run and it was hard work for the whole two laps. There were plenty of well stocked drinks stations and it had stayed quite cloudy, so dehydration and over-heating were not such huge threats as they had been in Putrajaya.

After a u-turn in the run course I could see Winona was about 300 metres behind me. I just had to hang on! A little further I passed my friend Guy, we exchanged a few words, I tried to get him to run with me... he wasn't keen.

At about 2km, my friend Yves came running up from behind, we ran together for quite a while, passing another friend Mark (who had already done the sprint race the same day) at about 3km, which was just before a blonde girl came hammering past us. My first thought was that she must be part of a relay team, "Nobody runs that fast after a bike course like that". But she wasn't part of a relay team, she was just fast - and she eventually took the second spot on the podium - so much for me hanging on!

Eventually Yves dropped behind a little way and at another u-turn in the course at about 9km I could see Vicky, another great runner, coming up close behind. No way was I letting anyone past without a fight this close to the end, so I did what I probably should have done a little earlier in the run and gunned it all the way to the finish line! So, I did hang on for a podium spot after all. It would have been nicer to be a little higher up obviously, but third overall, age group first, a personal best time and a superbly enjoyable race was perfectly good enough for this day.

My Mio Alpha said I might have been able to push harder. Average heart rate was about a third of the way into my "steady zone"... next time, next time!

There was a little ceremony with flower garlands and champagne spraying. 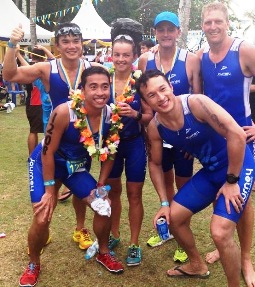 After a few photos with my training buddies from Journey Fitness, chatting with friends and gathering all of my gear together I cycled back to the hotel to find the boys. They were waiting for me at the lobby and already knew the results from looking on the race website. 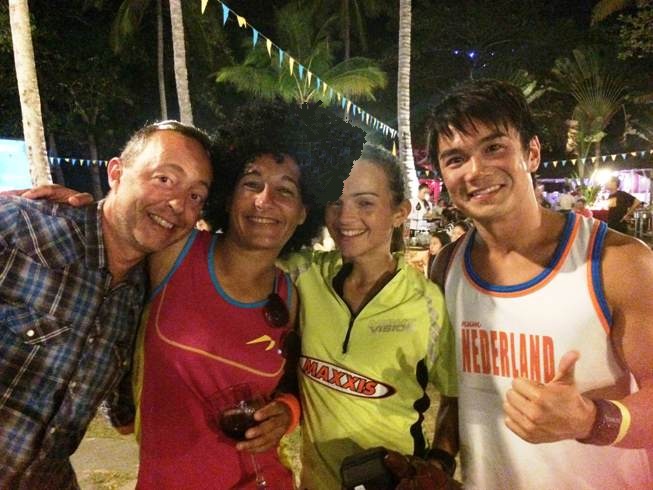 The Bintan Triathlon was definitely the most enjoyable race I have participated in. The organisation was top notch, the atmosphere was great, the course was fabulous and beautiful the whole way - from clear, warm waters (and no jellyfish stings) on the swim, to a challenging but not brutal one lap (I hate u-turns!) bike course to the varied run course through the jungle and along the beach. I would highly recommend this race to anyone.

Also, the prizes were awesome! I was really chuffed with a Garmin Edge 500 bike computer with all the extra bits and some Julbo 'Zebra' sunglasses. It's such a cliché, but both were exactly what I wanted. I had just got rid of my GPS triathlon watch and had nothing to use on the bike anymore and the nose piece on my current sunglasses is starting to disintegrate and leave sticky marks on my nose...! Perfect!

Next year I am seriously considering doing both the Sprint and the OD on the same day; it was that good.

Back to the office on Monday morning...