Homepage > Desaru 113 Triathlon - She beat all the boys! ALL of them!

Desaru 113 Triathlon - She beat all the boys! ALL of them!

Not me. Jacqui – she was the first person over the finish line, before all of the men. It was fantastic!

My day was a little different.

Thursday evening we packed. Friday evening I went straight from the office to meet my husband, the kids and my bike at the ferry terminal. We arrived at the hotel in Desaru and put the children straight to bed. By the time I got downstairs I had missed the race briefing. I was not really worried because I had agreed with the organisers that I would change and do the sprint distance race on Sunday instead of the half iron distance on the Saturday morning which I had originally signed up for. I had been a bit ill over the 10 days or so prior and still wasn’t feeling 100%.

So I went downstairs and across the enormous resort to the lobby and the restaurant where the briefing and race pack collection had been to see if I could find anyone still handing out race packs.

Rich and some of the other guys who had also arrived that evening had found one of the organizers and were following her to get their packs. I tagged along.

She got out the 113 (half iron distance rounded to the nearest km for each leg) race pack for me, “Are you sure you want to downgrade?”

…but I needed to pay an admin fee there and then for changIng and I had left my wallet in my room. The resort was huge and I didn’t want to walk all the way back to get my money, I just wanted to go to bed.

So... to avoid trekking back to my room that evening, I kept the race pack and didn’t change it.

Back at the room I set up my bike and my kit for the next morning... Only then realizing that I had never run any further than 5km in the shoes that I had with me, realizing I had no gels with me and no bento box or tape to attach any food to my bike. I also had no GPS watch or bike computer (in a sprint you just go as hard as you can - the distance and time are irrelevant!). I did the best I could, using velcro straps and elastic bands to attach Clif bars to my bike frame. 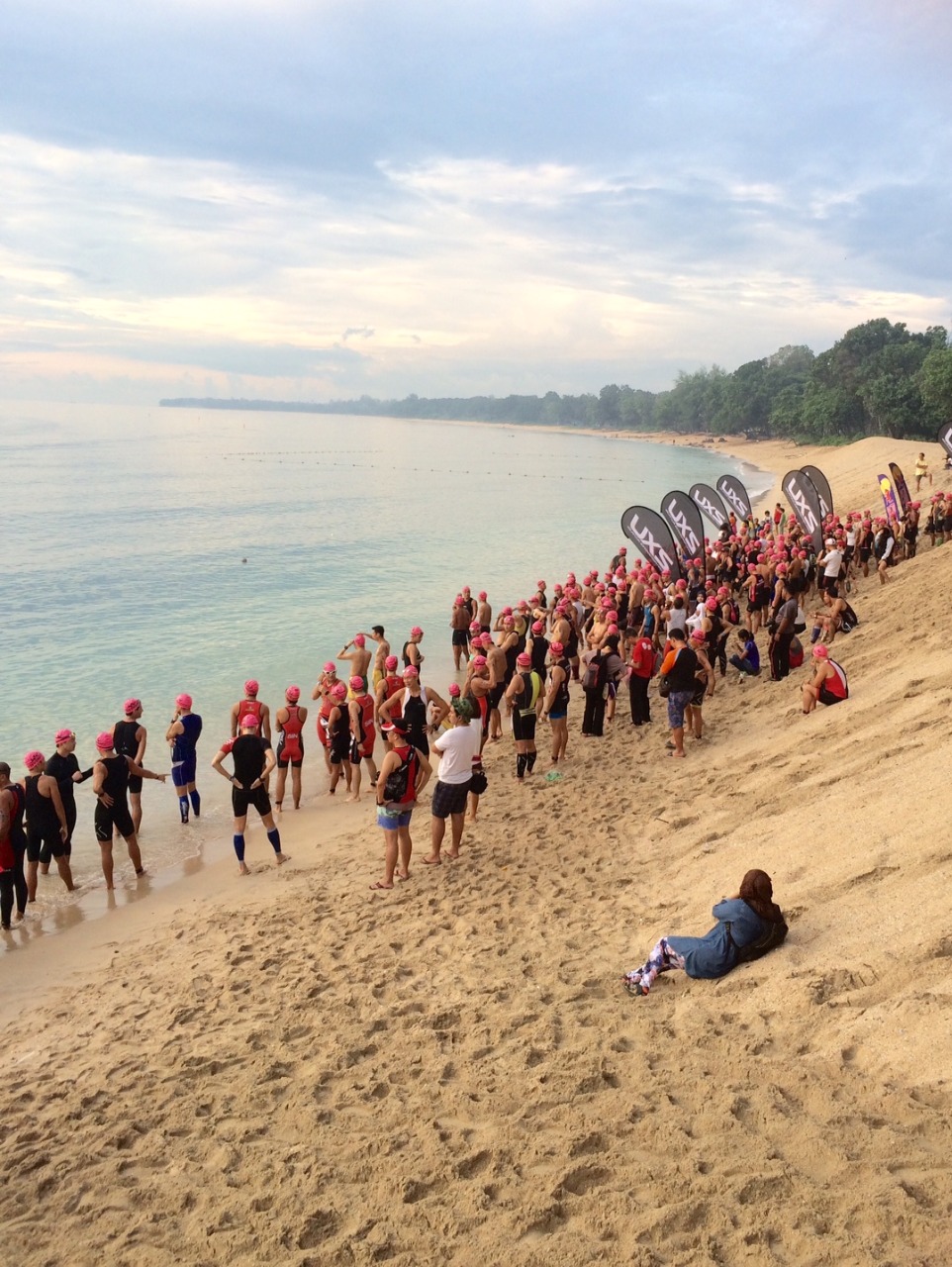 The night felt very short. At 5am I got up ate a banana and some dry granola for breakfast all washed down with 1 litre of elete electrolyte mix. Then I made my way down to transition .

The transition area was great! It was sheltered, concrete and carpet floor with two big gates, one towards the beach and the swim course and one towards the bike course. I set it up just as Emma arrived. We chatted a little then I left her setting up her bike, went to have some coffee, had a chat to Stuart and Jacqui, then made my way to the beach.


The water was lovely. 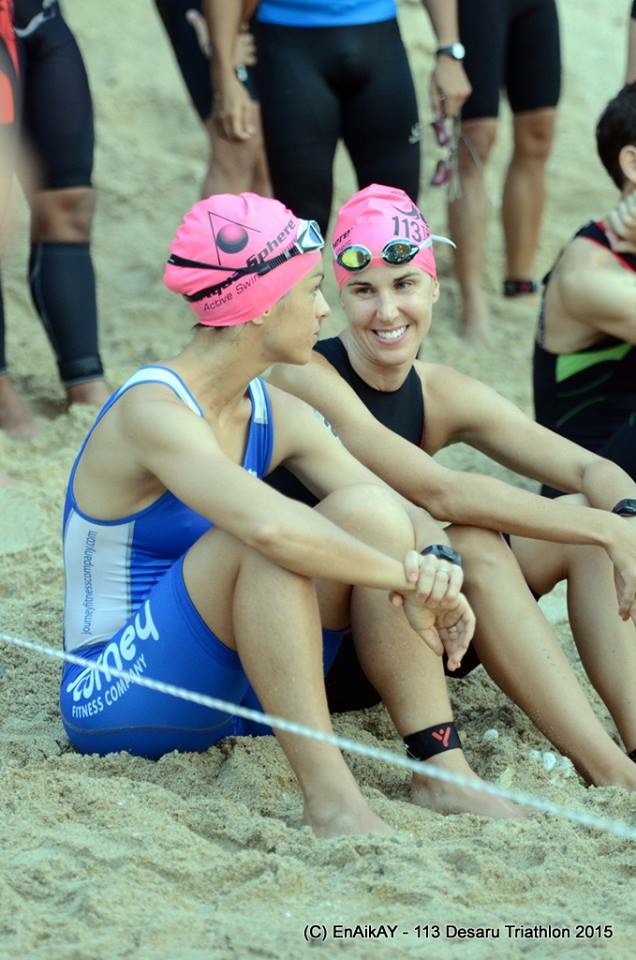 Still like a mill pond, clear and warm - and very pretty just as the sun was coming up. I had a quick warm up then got out of the water onto the beach with some friends from Singapore and waited for the start which was supposed to be at 7am. 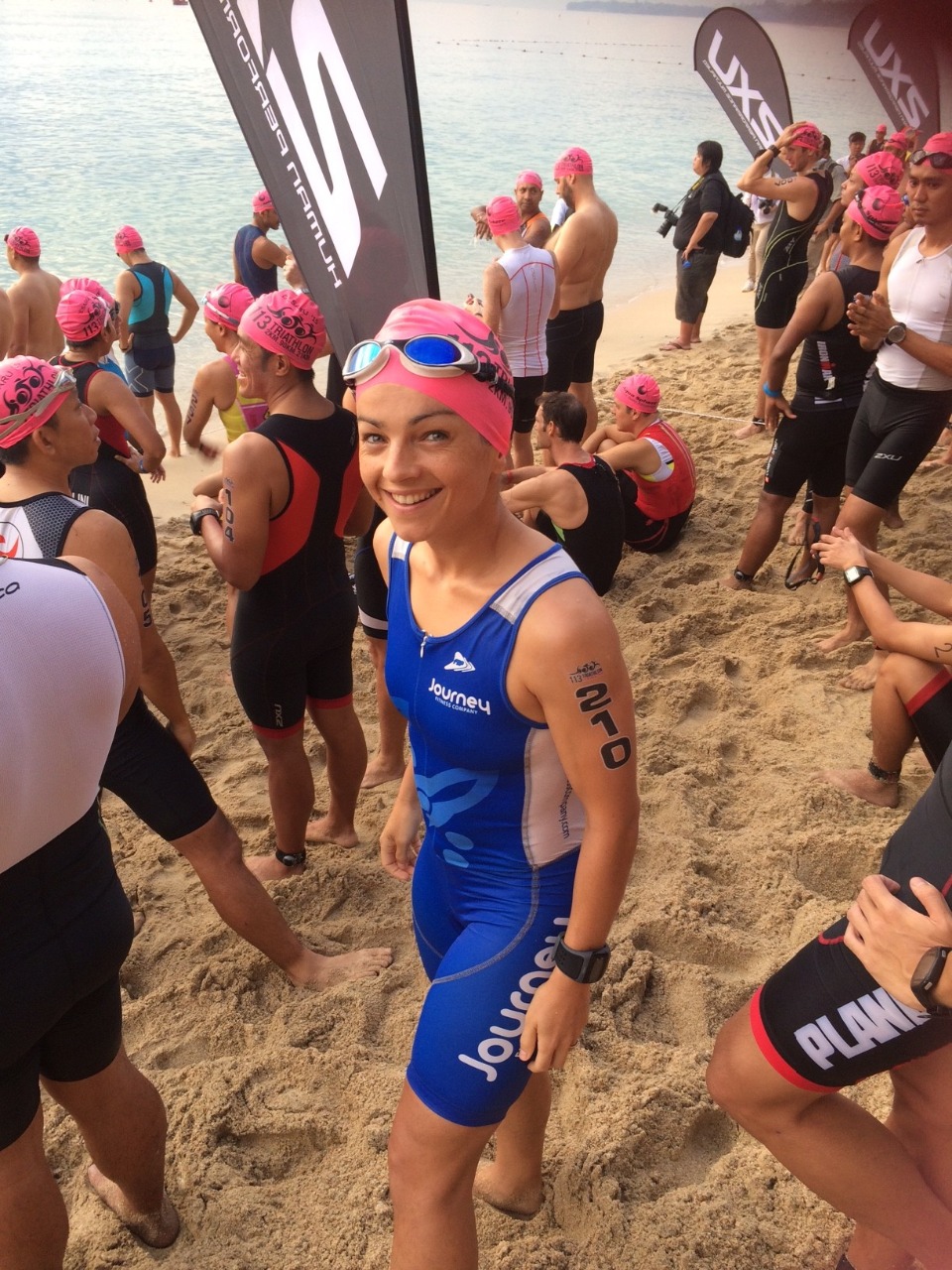 At 7:10 am my husband and children appeared on the beach. We had a chat and a cuddle and after we were flagged off they went for breakfast.

I enjoyed the swim very much. I had a good draft for most of it, kept fairly well to the shortest route, but I remember thinking during the first lap that the ring on my right hand felt a little loose… I usually take off all jewellery for races, but I had forgotten this time. While rounding the second buoy on the second lap someone literally climbed onto my back. I curled up, planted my foot squarely onto their chest and pushed them off quite hard. Sorry whoever you were, it wasn’t meant to be vicious or aggressive, it was really just a reflex reaction! 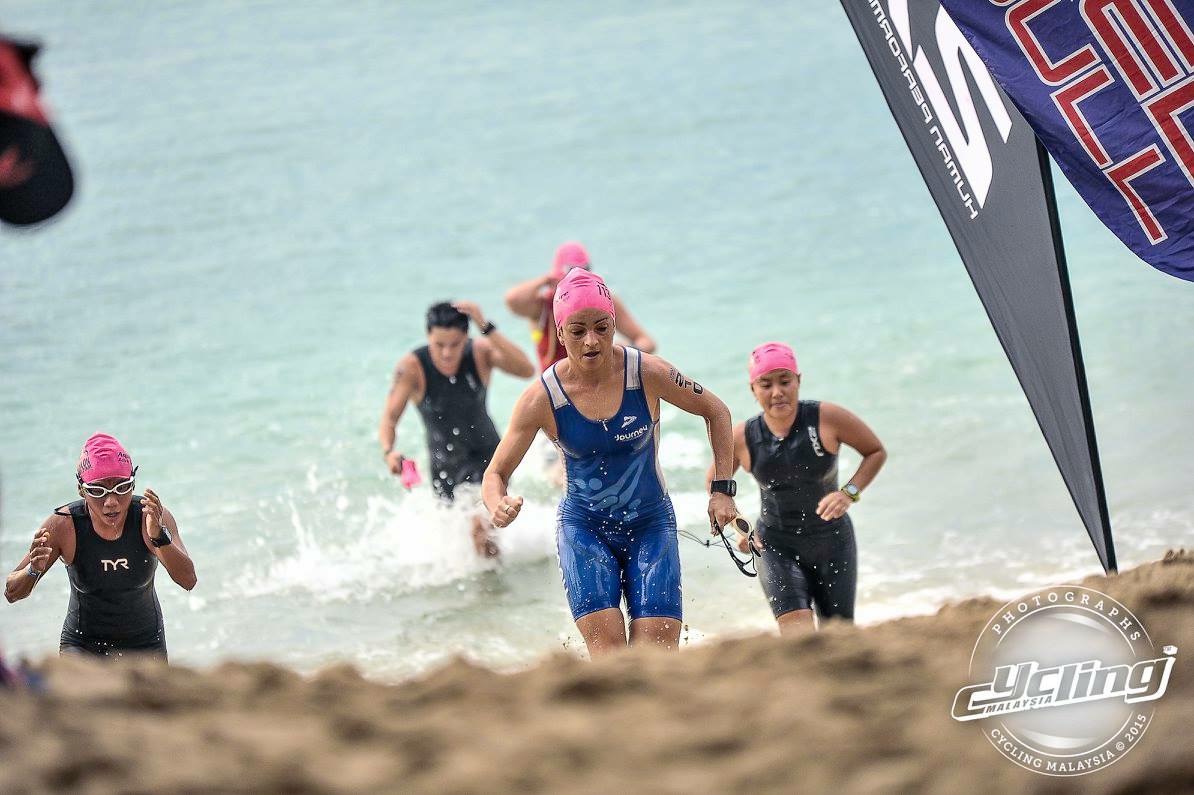 By the time of got out of the sea and ran up the beach and along the wonderful (it was like the softest carpet!) grass lawn to T1 my family had finished breakfast and we standing at the entrance to the transition area cheering! It was great to see them.

My eldest son was shouting “MUUMMAY! MUUMMAY!” so loudly that his face was turning red!! 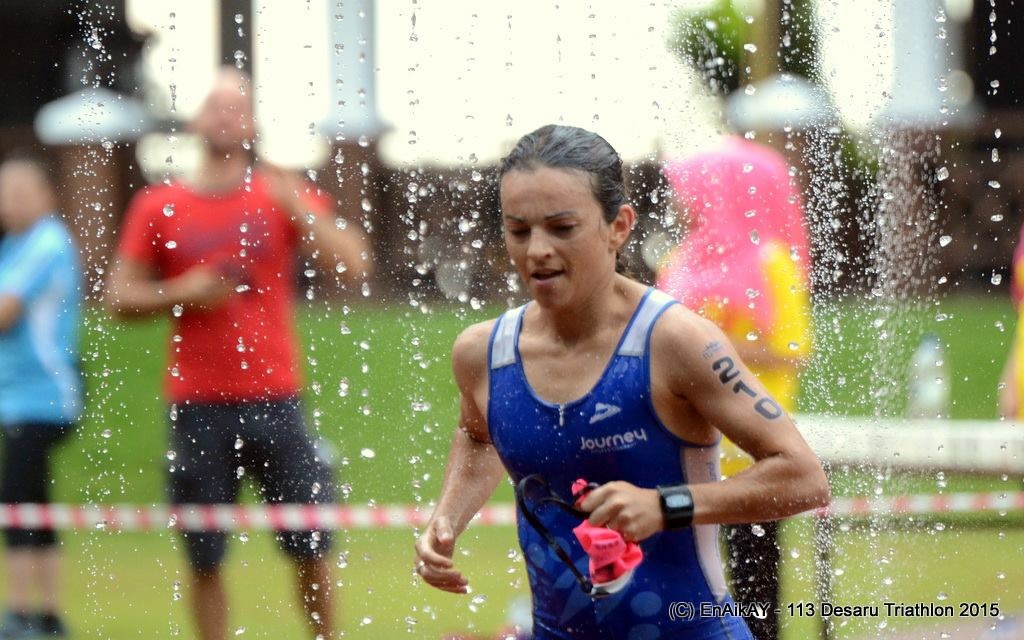 Transition was quick but the first part of the bike was tough. It was all up hill for about the first 2 km. When I first put my sunglasses on they steamed up because they’d been in the cool transition zone and I was wet and then out into the sun. I couldn’t really see through them so I hung them on the front of my tri-suit thinking I’d get some speed up once I got out to the flats, sort out my shoes and then my glasses. I lent forward to put my weight onto the pedals and heard something drop. I looked behind and saw something blue on the road about 6-10 metres back down the hill and realised I had dropped my glasses. I asked the volunteers at the next aid station if they could possibly go to look for them, but they didn’t seem interested (either that or they couldn’t understand what I was saying). I carried on pedalling.

The ride was nice, green and quite scenic with a few rolling hills – a lot of the road was quite rough and made everything rattle a lot. I started coughing at about 6km out and it got worse. I eased up, slowed down, took a drink and tried to relax my breathing.  Then it got better. At the first aid station, I watch the guy in front of me knock the bottle flying out of the volunteer’s hand. I wasn’t in so much of a hurry, so I slowed down and shouted, “Run with me! Run with me!” He did, and made a perfect hand off.

After about 20km I saw Arnaud, followed by Jacqui and then a few more guys. Just after the turnaround I saw Emma, she was looking great and I expected her to pass me very soon. She did. Then Stuart came past, “You really are taking it leisurely, aren’t you?!?” he shouted.

“Yup. I’m enjoying myself,” I thought.

Then I saw two big groups of guys cycling together – cheating – drafting from each other. I was surprised to see so many kits that I recognised from triathlon clubs in Singapore. These were not newbies who didn’t know the rules who were inadvertently contravening the rules, these were triathletes who were deliberately cheating. I saw groups doing this just after each turnaround – very disappointing. I didn’t see a single draft marshal though. Just before the end of the bike leg, about 5km out from T2 three guys passed me as a pace-line, then slowed down in front of me. I dropped back and then when I realised they were slowing down for good, I passed them again. After a couple of seconds I looked back and they were all stuck to my wheel, no more than a metre back. I shouted at one of them (who again was wearing the kit of a fairly big tri-club in Singapore with the Team name including B and Ung) that he should either overtake me or drop back. He didn’t. So then I shouted again that he was a cheating “something that I wouldn’t say in front of my children” and dropped the hammer and left them. I was more than a little bit angry.

I took water at every aid station and ate a Clif mojo bar every 25 km. The last bar was a caffeinated one – I started it just before we came back into T2 and then kept it in my pocket for later in the run.

As I jumped off of my bike my family were waiting and cheering on everyone! Someone had given them inflatable clappers (I found out later that it was Rich, who had dropped out at half way on the bike because he wasn’t having fun) and they were making a lot of noise with them! They had been playing at the water park with Daddy for most of the time that I had been on the bike.

I put on my 3-sums, triathlon specific racing flats which I usually wear for sprint distance races. I no longer had sunglasses, so I was grateful to have my Maxxis cap as some protection from the sun. The first part of the run was good. I felt fine coming off of the bike, the jelly-legs went away quickly but I still made sure I did everything possible to keep myself cool – ice in my hat, cold sponges in my tri-suit, cold drinks at every stop and running in the shade wherever possible. I also deliberately followed the shortest route round each corner to run the least distance possible without cheating.

I caught Stuart at about 8km, had a quick chat and carried on. After about 10km I felt something rubbing on my toe. I thought it was a grain of sand so I stopped and took of my shoe to check it. It wasn’t sand, it was just a hotspot from running much further in the shoes than they were intended for. The run was quite hilly and exposed. There were a few clouds in the sky which was nice, otherwise parts of the run would have been just like Putrajaya!

At about 14km I saw Jacqui coming the other way. She looked behind her, but there was nobody in sight. “They’re nowhere,  Jacqui! Nowhere. You’re miles ahead!”

“I can’t believe I’ve beaten all of the boys!” she shouted back. After at least another 5 minutes I saw the first man coming home.

There was one big hill that we had to do twice at about 5 and 15km. Going up was tough, especially the second time, but coming down the second time with sore feet was probably worse! 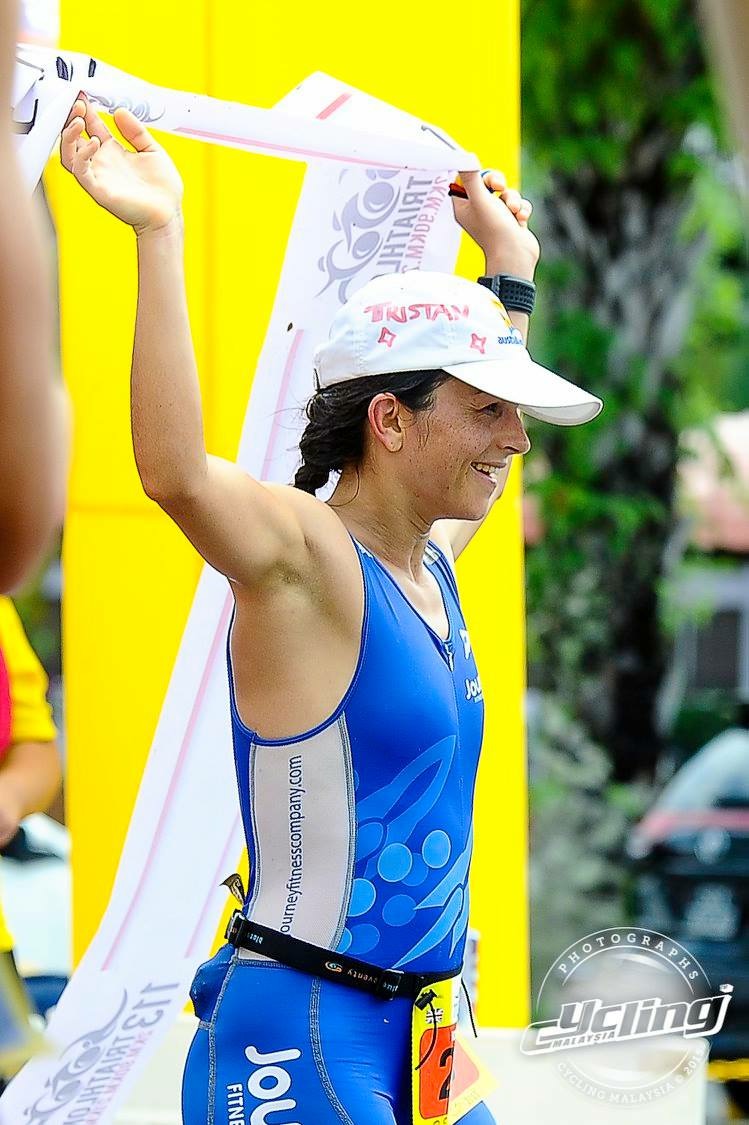 I was very happy to finish. I was also very happy to have done the whole thing with my Mio Alpha. I kept my heart rate down on the bike and on the start of the run, but this watch doesn’t have GPS so I had no idea how fast (or slow!) I was going or how far I had gone, which turned out to be a blessing because the course was long. 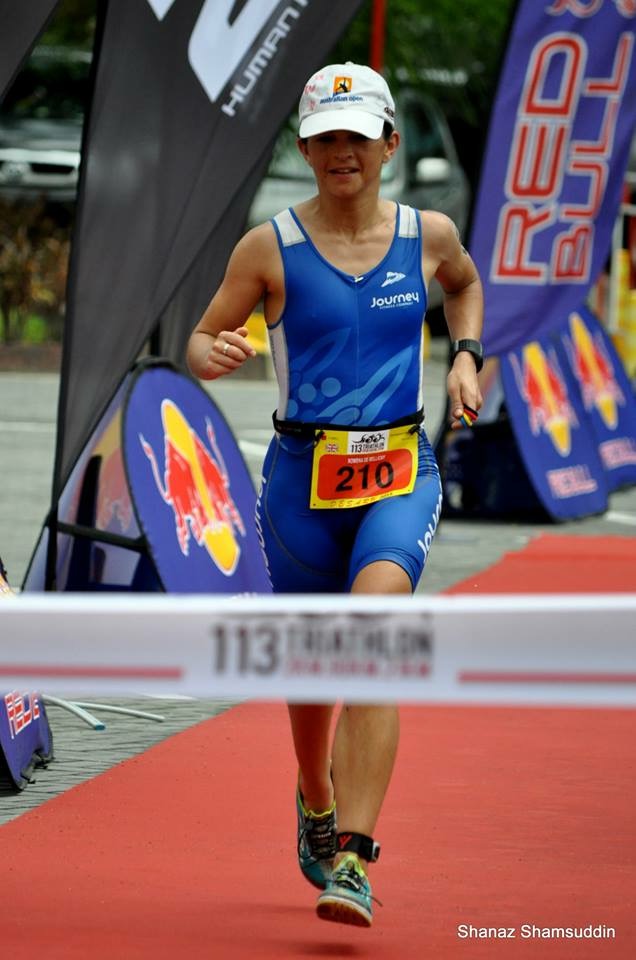 The bike was 97km and the run was over 22km. I was totally oblivious to the extra distance, but apparently it was quite demoralising for many people who were watching their GPS and wondering why they couldn’t yet see the end of the course!


We had a quick shower, a rest and something to eat and then went back down to the finish line. The prize presentation was supposed to be at 3pm, so we booked a trip to the Ostrich farm at 3:30pm. The boys played while we waited and cheered on those still running in to finish but at 3:45pm when the presentation still hadn’t started, we left to go to see the Ostriches. No podium photos! I collected my 2nd place trophy afterwards… but I didn’t realise until later than evening that they had given me the Men’s trophy!

The day finished perfectly. After we had bathed and tucked the boys into bed, I went off for a 90 minute massage that my lovely, lovely hubby had booked for me!!

Thank you to Nik Fahusnaza (enaikay), Cycling Magazine Asia, Shanaz Shamsuddin and my husband for the photos.