The first thing that happened when I woke up was thunder and lightning… and not metaphorically.

I went downstairs, ate some kiwi fruit, half an energy bar, a glass of orange juice and cup of coffee. Not quite your typical pre-race breakfast, but I felt like it was enough. I got dressed, put on my socks and shoes, took an umbrella and walked to the park. It was raining quite heavily, and as it got really violent,  I stopped in a bus shelter on the way for a few minutes watching the rain bouncing off of the ground.

It eased off a bit and I continued on my way. When I arrived at the start it was still drizzling. I dropped off my bag, drank some water and asked about 3km fun run race bibs for the children and husband. Everyone was super friendly, helpful and seemed to know what they were doing. There was a drone flying over head taking some really cool aerial footage of the event.

The MC announced that the start was to be delayed until the lightning stopped. I warmed up, had some more water and visited the portaloos, and then got more water again.

Suddenly, Fernando, who seemed in charge, marched straight at me "I need you."

"How do you usually warm up for a race?”

I told him that I had already done it – I was ready to go!

“We need to delay the start because of the lightening... Need to keep crowd engaged. Will you lead a warm up for everyone?" he replied.

He didn’t really give me a chance to answer him. “I’ll recruit you a team. How many do you need?”

So we waited next to the stage, four other guys came to wait with me. My mind was racing – how do I put together an easy-to-copy warm up that could be done on the spot?

We finished up and then wandered over towards the start. I was near to the front of the crowd as we waited for the flag off. It had stopped raining, but was still al bit cloudy and there was a light breeze – perfect (or as close to it as the tropics get) running weather!

And we were off!

I knew I had a lot in my legs from the week of training – a 26km training run and a couple of fairly intense bike sessions – so I start off fairly steadily, aiming for (what I thought was) a realistic 45 minute race. I realised actually how tired my legs were at about 4km and eased back the pace even further. I reached the halfway point at about 22m45 and at km 6 a woman ran past me.

At km 8 I caught a guy who had passed me at about km 2. We ran together for a while and I pushed him until about 9 ½ km then told him to “go!”. I almost caught up with him again a few metres before the finish line  - he was tired and we ended up just a split second apart.  At about km 9 we passed a big pack of runners going at an easy pace; I heard “Go Iron Mummy!” It was my runner friend Nicholas! Thank you for the encouragement!

I felt a bit full during most of the race – I think I drank too much water in the time spent milling around due to the delayed start - and as soon as I stopped running the gag reflex kicked in and I had to go and hide behind a tree to ‘empty my stomach’ a little bit. The volunteers handing out the medals at the finish line were not impressed! The second half of the race was slower, about 24m15, but I had to put in a lot more effort on my heavy legs to even get to the finish!

I found my family quite easily after the race – still with their bibs on from the 3km run and so, so proud to show me their finisher medals! The boys were so chuffed to have run and finished a race. 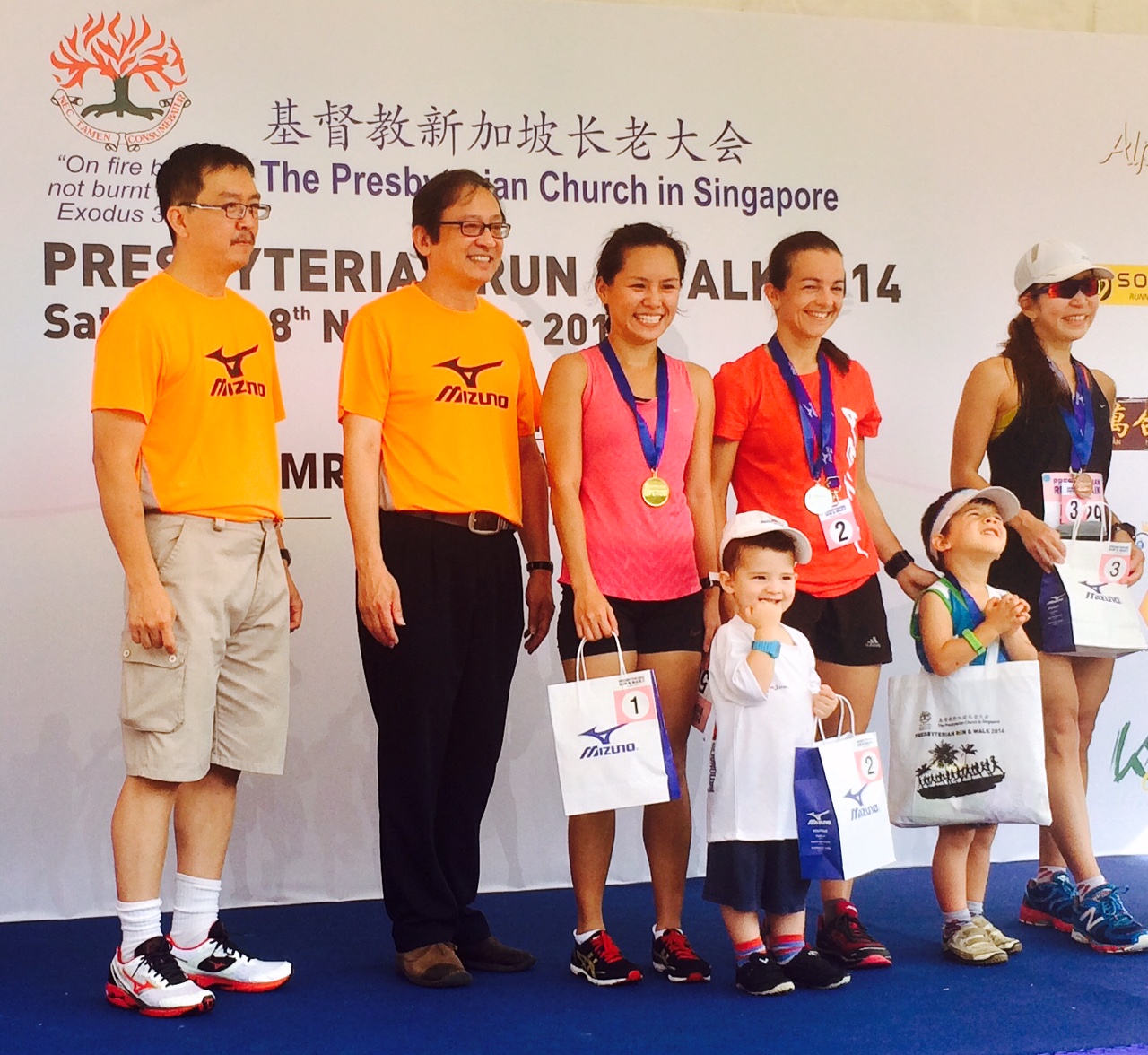 We waited a short while then we were called for the prize presentation. The boys wanted to come up onto the stage with me.. there were some jokes about my ‘body guards’.

This race was really well organised. The people were lovely, welcoming and helpful and it was a lot of fun. It was so nice to participate in a race for a community cause. We don’t regularly go to church, but this was a small community with good intentions doing something pro-active… rather than simply organising en event to line the pockets of a sports company’s boss.

I changed out of my running shoes to Oofus recovery shoes, had breakfast with husband while the boys went to their gymnastics class. We all walked home together for a light lunch, foam rolling and a nap! A great start to the weekend!