The Tuesday before the race it was a mad panic after arriving home from work to make it to the other side of town to get the race pack before they packed up at 8pm. We made it with about 5 minutes to spare. It was quite odd that the organisers made race pack collection only for one day, and that day was a weekday. I'm sure there must have been others who didn;t make it in time, and definitely many who were unnecessarily stressed about it. Perhaps it was to save money... whatever the reason, it wasn't fun.

I decided to do the 10km running part of the Aquathlon in my Intuitions rather than the 3sums. I wasn't feeling at my most nimble, the scales said I was not at my lightest so I thought I could do with the extra cushioning. After a few weeks of not doing very much at all, my tri-suit felt a bit tighter than usual too. It could have also been because I hadn't been wearing much lycra and tight clothing very often over the last few weeks.

I had breakfast with the boys and then cycled to the start of the race which was about 8km away from home. I locked up my bike, quickly set up transition with shoes, race belt and sunglasses – realised I had forgotten to cut my toenails, thought, “oops, nevermind. Fingers crossed it’ll be fine” - then found the toilet block. I found Flora on the beach near to the start, but not many other familiar faces. Kath, Jacqui and Winona were all missing... I was expecting a few to be doing the Ironman in Langkawi, but these ladies weren't. No idea where they were!  I felt OK, we chatted. I told Flora I was going to stay in her draft and tickle her feet the whole way. She just laughed.

The first lap felt fine – except that I could feel my mangled, dying finger nail starting to become loose as I pulled my hand through the water (I won’t post a photo.. suffice to say it’s yuk). The pack was a good size but not too violent! Once we got in for the second lap of 750m I found myself pushed against the rope, my feet got tangled in it and despite trying to stay in a straight line the current kept pushing my into the rope and the buoys. It was really hard work. I mentally kicked myself for not having checked the current before the start. I could have entered the water much further over to the left and used the current to my advantage, pushing me towards the first turn. But, I hadn't checked it, I didn't enter the water in the right place and it certainly wasn't helping me! After the first turn it was a little easier, but after the second turn we were pushed off of the rope and away from all of the markers. I stayed close to another woman swimming at about the same speed as me, I stayed on her hip, used her draft and her body as a shelter from the current which meant I needed to work a little less to go in the right direction.

Transition was uneventful. It wasn't particularly smooth, but I think I gained a few places. About 10 metres out of transition I saw Flora. I passed her slowly and remarked that she'd had a good swim. I felt heavy, really heavy, especially around my hips. My legs wouldn't move much faster, so I eased off a little and tried to get my heart rate (in the "very hard zone") down a little. It didn't come down. I felt awful. My abdomen felt really tight and I could feel tiny cramps all over, especially just below my ribs. I also felt a bit sick, but then thirsty at the same time. I took some electrolyte drink at the first aid station but slowed right down and drank it very slowly - I was worried it would make me vomit. I didn't vomit and I carried on running steadily. I felt so awful that it even crossed my mind I might be pregnant (I'm not! I checked!!).

On the second lap, at about 6km a guy in front of me stopped. I felt so bad, I used this as an excuse for me to stop too. I made him walk with me and eventually convinced him (and myself) to start running again. We ran together for 500 metres or so, then he stopped. I grabbed his arm and made him run again. We did that a few more times then I carried on without him. I hadn't noticed anyone come past us, but I thought I must be quite far back in the race, so despite feeling a little better I didn't pick up the pace - my heart rate was still very, very high - and ran at the same pace all the way to the finish line. 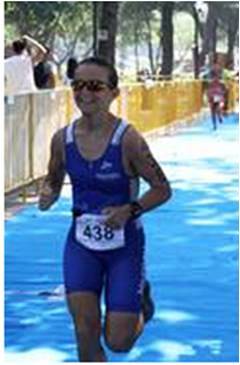 I didn't bother going to the results tent. I got my bag, had a shower and changed into dry clothes then had a chat with the guys from SingPhil and FastCorner, who were sponsors for the event. Then I went to look at the results. I was second in my category by 51 seconds. I couldn't help but think that if I had not been thinking so negatively when that guy stopped in front of me (or if I had applied rule #5 rigourously), then I might have been able to make up 51 seconds and won... a lesson... I'll remember it!

I spent the rest of my weekend with the children... more train tracks, lego and no training.

More information on Rule #5 can be found here.