We took the children to run the Kids 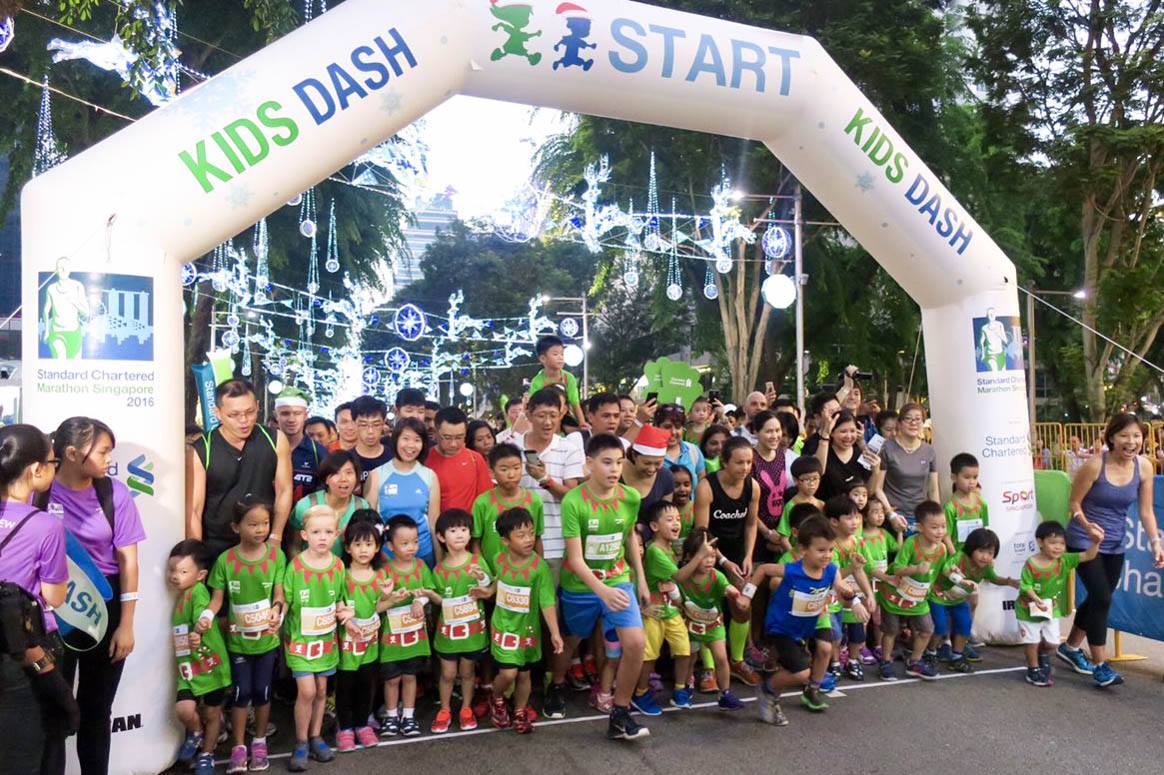 Dash the evening before the race. We were a bit delayed in starting and it was very, very crowded, but the kids seemed to enjoy themselves. My eldest son asked to borrow my watch to time himself over the distance - he ran hard the whole way and finished third or fourth in his wave. My middle son ran as fast as he could with Dad and was very chatty and super proud of his finisher medal at the end.

After their run, we walk all the way to the other end of Orchard Road to find somewhere less crowded to eat. We were all home pretty late and well worn out!
The half marathon was set to start much earlier this year at 4:30am, so I set my alarm for 3am and tried to sleep... I managed about 3 hours and then woke up every 30 minutes or so to look at my watch. I ended up getting out of bed at 2:34am, before the alarm went off!
I had a big drink of electrolyte water, ate some nuts and a piece of homemade banana bread. I got dressed and put on my shoes - I decided right at the last minute to wear the lighter One2 instead of the more cushioned Torin that I had been planning to run in.... I'm still not sure why!
Then came the most important part of the preparation - 30 minutes attached to a breast pump - so that I could be more comfortable running and so that my baby could drink it in case I wasn't back before he woke up!
I called a taxi (it was too early for any public transport) and made my way to the race start with a paleo pantry bar, two honey stinger gels and two bottles of citrilyte water. I walked through a shopping centre on my way to the start pen entry and used their 'facilities', before I passed the race portaloos with queues 20-30 people long! I ate my bar and had a big drink of water - 45 minutes before flag off.
The start pen entry was easy to find, I walked as far forwards as I could and then sat down. I was very calm, I knew this was just a slow run and not a big race (it was totally unrealistic to think a great time was even a remote possibility at my level of fitness and carrying 7kg more than "race weight") so I checked my heart rate while I was sitting there waiting and was happy to see that it reflected quite accurately how I felt - 51bpm.
Amusing myself looking at all the shoes and socks, and what people were doing with their feet, some dead still and some fitgeting lots, I spotted another pair of Altras amongst all the common brands... I looked upwards and saw my friend Mark, so I stood up and went to chat with him until the race start!
After the gun went off, we ran straight down Orchard Road under the Christmas lights for almost one kilometre - I kept my heart rate in check between 160 and 170 bpm (the lower end of my steady zone or zone 2); we ran through the Central Business District where my GPS watch went haywire and clocked me an extra 500 metres or so! Once we were no longer amongst the skyscrapers the GPS seemed fine again, but the heart rate monitor went crazy spiking to 216bpm. I was not totally confident that it was the technology malfunctioning and not my heart... so I slowed down. The heart rate on my watch showed between 195 and 216 bpm for about 2km but after a while I was sure that it was the watch and not me - I have experienced the same with other HRMs near to the barrage before. I think there may be electromagnets in the barrage which affect the sensors.
At about half way the number displayed on my watch (175bpm or the middle of my zone 2/ steady sone) corresponded much better to how I felt my heart rate should be and I felt comfortable again. I ate a gel just before an aid station and washed it down with water. I began to feel like I was speeding up and everyone else was slowing - I was gradually picking people off one by one and nobody was passing me anymore.
A little while later, just before 12km Ben was waiting, cheering on the runners just where the routes for the marathon and the half-marathon separated. I felt good and it was great to see a familiar face! A sharp pain began to emerge from my left ear all the way down to my shoulder and my bra began to feel uncomfortable.
At about 14km I ate another gel and began to pick up the pace a little. For the next 5km or so I relaxed, no longer deliberately holding back but not "going for it" either. As I ran up the small hill under the bridge on Republic Boulevard I dropped my chin slightly and the pain in my shoulder eased. It was hard running with my chin down though, so I tried to keep my neck and shoulder relaxed and just dealt with the pain. My bra was getting more uncomfortable.
I noticed there were many people following the curves of the road and not taking the shortest routes across the apex of street corners. I passed  few people who I think were running about the same speed as me, just by running the most direct route. Before long we could hear the finish line, the loudspeakers and music, and there were more and more people watching the race. I ran faster for the last part of the race and finished at a good pace. It was just getting light!!
After I had a drink and a chat to a few friends and colleagues, I watched Felix, the marathon winner come home in barely 15 minutes more than it had taken me to run the half!
My legs were tired, but with some compression and a massage the aches were gone in no time. The worst damage was from my bra. The one I wore was made by a very, very large, global sports brand and it was not great as you can see from the photo. Time to re-invest in a seamless running bra.