On Thursday evening my watch broke. It started to vibrate constantly and the screen went fuzzy while I was swimming my last easy session before the race. This was not ideal timing. I packed it up and sent it back to the manufacturers in the hope that it could be repaired or replaced.

I mentioned during the drive down to the race venue that I felt a bit nervous. I wasn't ready for this race. I felt under-trained, especially for the bike. I had been running well.... but I felt generally tired. The last few weeks with the kids had been a bit hectic.

The afternoon before the race we walked to the castle across the fields and along the footpath... which was beautiful, but the grass was a bit long and the ground was uneven in places. Of course, I turned to point out something on the other side of the field and twisted my ankle.

I just felt a bit silly for not being more careful. 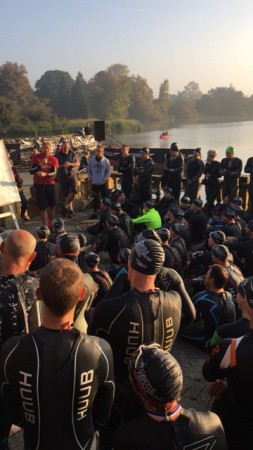 The castle and gardens were beautiful and it looked like we were in for some lovely weather. It was sunny and warm as we registered. I was pleased, because being cold and wet on the bike worried me!

We got back and I gave my bike a last look over. It was a bit dirty and the drive train was not running as smoothly as I would have liked, so I set about cleaning it up. The chain got stuck near the big ring, and without really thinking I stuck my finger in to free it and sliced it open on one of the teeth of the big ring. It pissed blood everywhere. Of course, we couldn’t find a plaster between us. I cleaned it as best I could, wrapped a tissue around it, held it over my head and continued cleaning up my bike with the other hand. I got a plaster later from our waitress at dinner.

I didn’t sleep very well. Nobody ever does the night before a race.

At 5am there was a selection of food 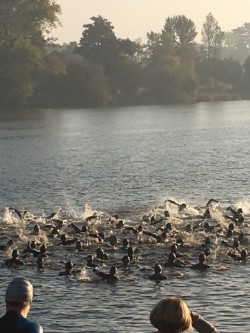 in the restaurant and some triathletes having a full English! I stuck with my little pot of muesli I had brought from home and a (very strong!) black coffee. Then we loaded the car and drove down to the castle grounds. It was a bit chilly! I set up transition in the usual way, went to the loo and then got my wetsuit on early to keep me warm. I had brought a spare pair before the swim start too this time – at the last race I did I had to walk from transition to the start in bare feet….!

The lake looked absolutely spectacular as the sun rose in the distance. This also meant that sighting the last couple of buoys before the turn into the river was very difficult with the sun directly in our eyes! 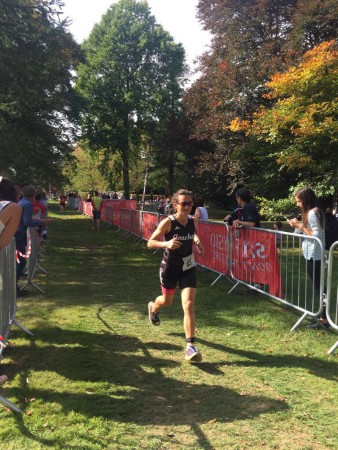 The water was very, very cold and I felt hungry already as we got in. We weren’t kept waiting too long before the horn sounded and about 150 of us swam forwards towards the rising sun. For the first 100 metres or so, I felt like I was breathing too quickly, then we settled into a rhythm and it was lovely. The water was cool and smooth and I found a few drafts.

Lots of people fell back into the water after being helped out at the exit ramp, partly because it was steep, but also because I think most people’s feet would have been numb like mine! My toes were dead until about 50km into the bike, despite making a concerted effort to wiggle them and thaw them out!

The bike course was tough with hard climbs 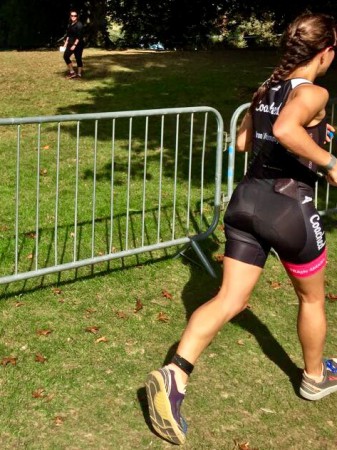 and scary fast descents. My shoulders and arms had almost as much work as my legs, hanging on for dear life on the downhills and pulling up the steep parts of the climbs. I slowed down to check on a guy who had stopped to make sure he wasn’t injured. He said he was ok, just fixing a puncture. The roads were not closed to traffic and there were a few near misses, mainly with cars overtaking other cars and not caring/ noticing that there was a cyclist coming the other way.

I was pleased to get off of my bike – as much as I do love the machine – and onto the run. I fel more relaxed and “at 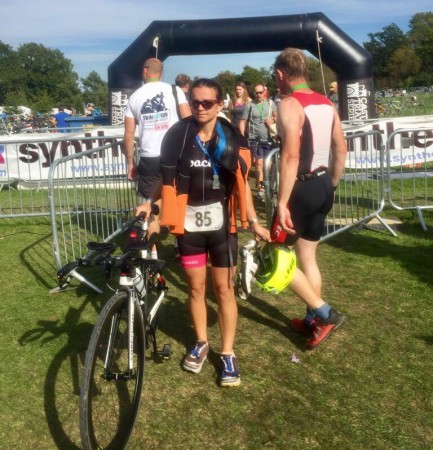 home” running the trails and footpaths. There were more tough hills for the run, but the countryside was lovely, so pretty. It was a wonderful course. I turned the other ankle half way around the first lap - just to even me out!

There were a lot of spectators, even around many parts of the bike course, which was nice.

I had no idea where I was placing… I knew vaguely the time of day, and that I was pretty slow compared to other races of the same distance that I had done previously.

The scenery was beautiful and I ran past 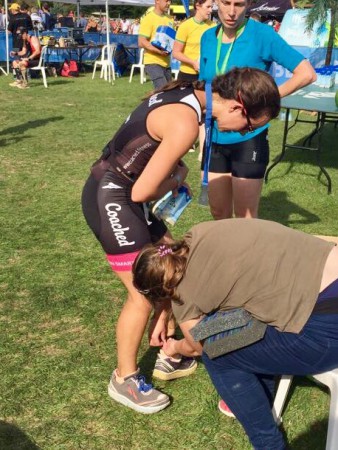 what felt like hundreds of people. It felt great! My kit was really fantastic; I couldn’t have asked for better, from my shoes, to my bike, my wetsuit, my goggles, socks and sunglasses. I feel really privileged to have such great equipment – very lucky.

When I finished, I was amazed to see that I was 9th overall female, including the elites! I was quite shocked. Everyone else found it tough too and the finishing times were all very different to what you’d usually see for a half iron distance!