For most of the last week I have been feeling very tired, not very motivated and even thought that I might have caught a bug or be anaemic. A champagne fuelled dinner with friends last night after a week like that was probably not the best preparation for the Singapore International Triathlon the next morning.

Even while I was having breakfast with the boys, I was still in half a mind to tell hubby to stay in bed as I did not feel strong enough to go and race - my Mio Alpha told me my heart rate was also a little higher than usual. I finally pumped up my tires and forced myself out of the door and left home quite late on my ten-tonne commuter bike instead of the Neurogen whose front brake was not working properly. The race was set up as usual, so once I arrived it was quick and easy to get everything set up and get down to the start with plenty of time to spare. It felt quite cool while we were waiting, the sun was not yet high in the sky and there were quite a few clouds.

None of the girls I usually see on the podium were in my start wave. Most I think were racing the longer distance the next day or later that morning in the Singaporean Elite category. The horn sounded and we ran into the water. I started drafting off of the lead swimmer but soon found myself quite far in front of her. The swim was nice and relaxed, a little movement in the water but nothing violent. As I turned the corner after the first buoy the sun was in my eyes and I couldn't see the next one. I knew vaguely which direction it was in and I didn't think the rope was moving too much so I followed the rope for a little while until I caught sight of the next buoy. From then on the sighting was very easy and straight back into the beach. I was first out of the water by about 40 seconds.

There was quite a long run into T1. I knew exactly where my bike was and was running out with it again pretty quickly. The transition area was a bit muddy and all of the men had started before us so it was quite slippery. I was a bit cautious and ran a little slower than I would have done if it had been drier. The bike course in the park is quite technical, involving a few u-turns, some sharp corners and narrow paths - it's not a fast course and there are no long straights where you can really get much speed up and into a rhythm. From that point of view it was not much of a disadvantage being on a road bike rather than the Neurogen. However, it did feel like hard work and I think the extra weight may have contributed to the bike time being slower than it would have been with my favourite bike.

The dismount may have also taken a little longer and been at a slower speed than usual. I was extra cautious as I couldn't help thinking about what happened last time I approached a dismount line...

Running back into T2 was even more slippery than before but it was completely empty, no bikes, which was a nice sight. I racked my bike, took off my helmet, threw on my 3sums and ran out. I didn't push too hard on the run. I was relaxed and concentrated on keeping my cadence about right and my breathing steady. I had forgotten that the aid stations were sponsored by elete electroytes so my first gulp was a lovely surprise! No nasty sticky stuff spilling everywhere and no yucky sugary/ chemical aftertaste - fantastic - more races should be like this!

At the end of the first lap, right next to the finish line, the MC was talking about the guys running but didn't notice me at all. This made me think perhaps I was not in the lead and I hadn't noticed a bike already back before mine. There was not much support out on the course either.... to be expected, but even when I came into the finish chute the MC said my name but made no mention of which position I might be in.... then I really wasn't sure. I typed in my race number at the timing desk and it said I was second. I was wondering who won (without me noticing her) until they put the provisional results up on the board. The name at the top had a bike time 10 minutes faster than me! This would have been more than 4 minutes faster than the fastest man, so I knew something was wrong.

The boys arrived, and after getting them settled and having something to eat, I tried to find someone to ask what to do about the timing mistake, but by the time I found someone they had started the prize presentation. Someone else had seen there was something wrong with the bike leg timing too and I was called up for the gold coloured trophy!

We waited a little while and got the boys changed into lighterweight t-shirts ready for the "Fun Flag Splash & Dash" race. We started a bit late and it was quite hot at the beach start.

There was a variety of teams, from a group of three guys, to families with older children, to us with a two and three year old. I had been told it would be suitable for them as the water would be shallow and in close to the beach. It wasn't. It was a square shaped swim route which went out at least 20 metres into the sea where neither Leo nor I could stand up. Certainly not suitable for young children. For the first leg, our eldest son took my goggles and I gave him a breaststroke-piggyback while he kicked all the way round; this was far more tiring than my entire 750 swim a few hours before! (maybe we should incorporate children carrying into our training...?) When we got out of the water for the run, he really went for it - he ran as fast as his little legs would carry him all the way to the cones at the other end of the beach and then back again to Daddy and Brother waiting to do the next leg of the relay. A similar method was employed for the second leg of the relay with a two year old clinging to my husband's shoulders (and neck) for the swimming part but then a little slower on the run. 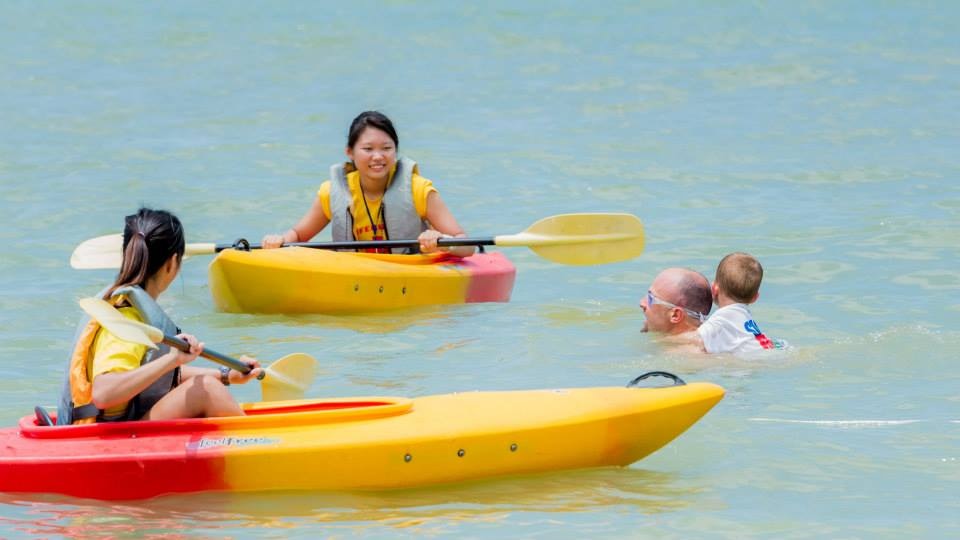 For the last leg I went round on my own and then joined with the rest of the family to carry the flag across the finish line and be presented with medals. The boys were so proud to have completed the race and won their medals... and despite being the youngest participants by far, we were not last!

The three of them started out for home as soon as we had finished the race. I packed up, collected my bike and then left. Just as I was starting to pedal, my friend JJ ran past on the last lap of his run for the Elite race. I cycled alongside him and offered some encouragement and tried to help him think about keeping a nice high cadence, strong arms and his chin up. He looked good as I left him on the last corner before he headed back towards the finish. That must have been a really hot race starting at 11am or so and running through the heat of the day.

We had a lovely morning, and it was really great to get the kids participating. They really enjoyed themselves!