This weekend I amazed myself.

I was genuinely concerned I might get into real trouble during this race. I think I’ve only ridden that kind of distance once (with the “Boardman Boys”)since the Kuala Lumpur - Singapore Ride for Sight in 2013.  and even that was a long time ago! The race has a reputation for being hard and hilly... and very hot, very, very hot. I had never done a “proper” bike race before and I was worried about not having enough to drink. I thought eating would be fine because I can carry plenty with me, but I would definitely need refills of drink and I wasn’t sure how that would happen or if it would happen often enough.

I arrived at the ferry terminal with my bike and bag while it was still dark. We checked in, labelled the bikes and had breakfast while we waited. The ferry ride over was fun, chatting, laughing and lots of suncream application!

When we arrived at the Sekupang Fery Terminal in Batam we all had our Arrivi Primo Singapura jerseys on and made the last preparations for the race. I had 2 full bottles of electrolytes on my bike (I’d already drank a whole third bottle on the ferry) and another small bottle of water along with a spare tube and plenty of food in my (borrowed from Federico) jersey pockets. I put suncream on my face and legs, full length arm sleeves to protect against the sun, my favourite cycling socks then checked the tire pressures and we were ready to go!

The day before the race there was a huge storm in the morning and it rained for over two hours. On the day of the race the sun was out with only and few clouds in the sky and it was hot before we even went to the start line. My team mate Bevan said when he checked just before the start it was 42°c. We were sweating even before we starting to pedal. Cat 1 and 2 went off in quick succession then we started the women’s race together with the Cat 3 men. 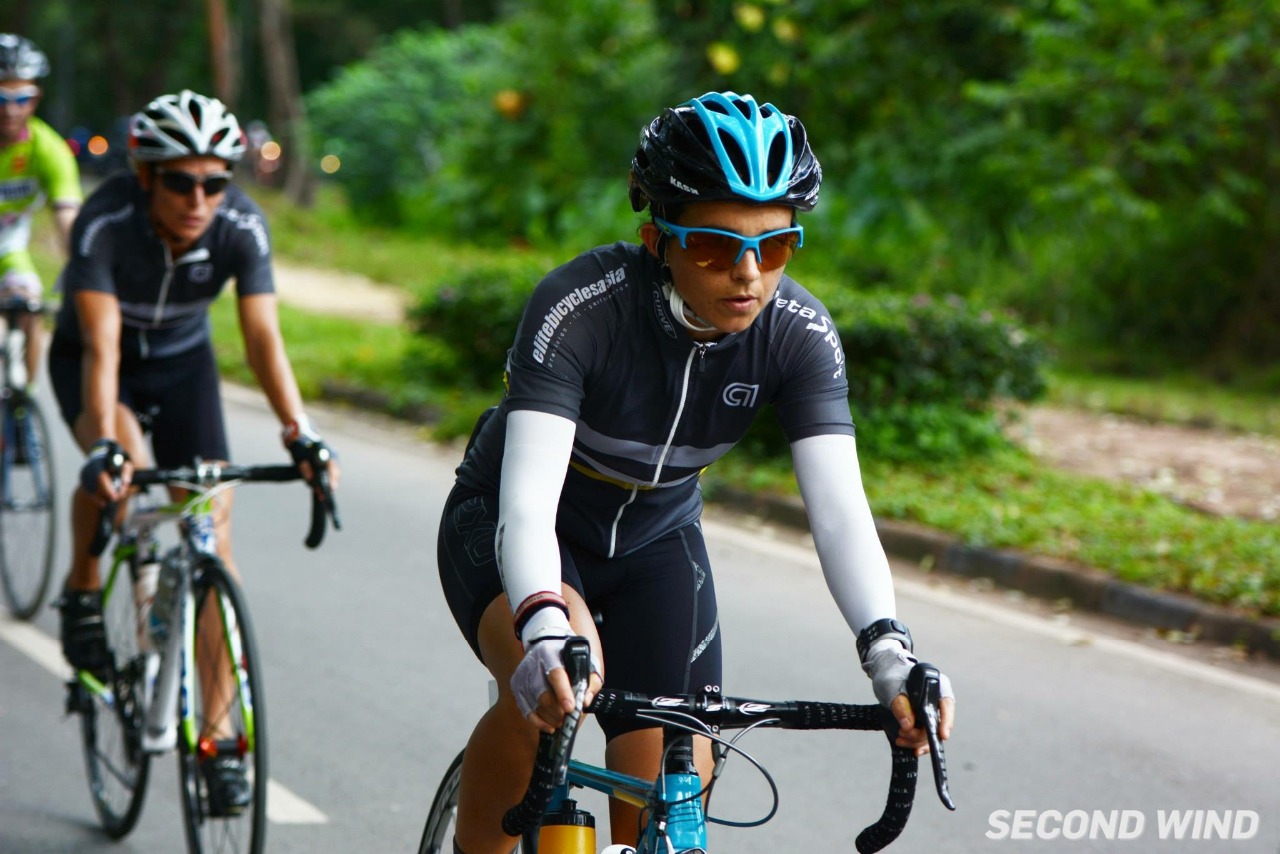 There was a 12 neutralized “warm up” zone to start with. Kath, Dione, Claire and I tried to stay together close to our male APS team mates. We gradually wound up the pace as we started to hit the rolling hills and better road surfaces. The pace felt easy... too easy I thought, but I reminded myself that we still had a long way to go and just enjoyed being in a big bunch rolling through the countryside! After a really short time out on the road I saw Sam putting his hand up and rolling towards the back of the group with a flat tire. Such a shame to have that happen so early.

I was diligent with my nutrition, eating before I was hungry and drinking lots. As soon as I had finished one bottle I looked for the “water bike” a roving motorcycle with a crate of bottles on the back, rolling next to the back of the peloton and exchanging empty bottles for full. I couldn’t see it! I mentioned to Claire that I wanted some more water and a few minutes later she called to me that the water bike was back. I switched out an empty bottle for a full one of yukky sweet electrolyte drink.

A while later, after a few more hills I had eaten a bar and a half of food and finished my second bottle of elete electrolytes. My team mate, Gavin, was next to me, between me and the water bike and told me to give him my empty bottle. I tried to shout that I’d like plain water but he couldn’t hear me because of the wind, so a few seconds later he passed me another bottle of the sweet stuff. Going up the next hill the peloton slowed quite a lot and I found that maintaining my speed brought me right up to the front of the group. I stayed out of the wind and slotted back in near to the front with Kath. I noticed she only had one bottle on her bike so I passed her the bottle of the yuk-electrolyte drink and then got water the next time the bike came past. 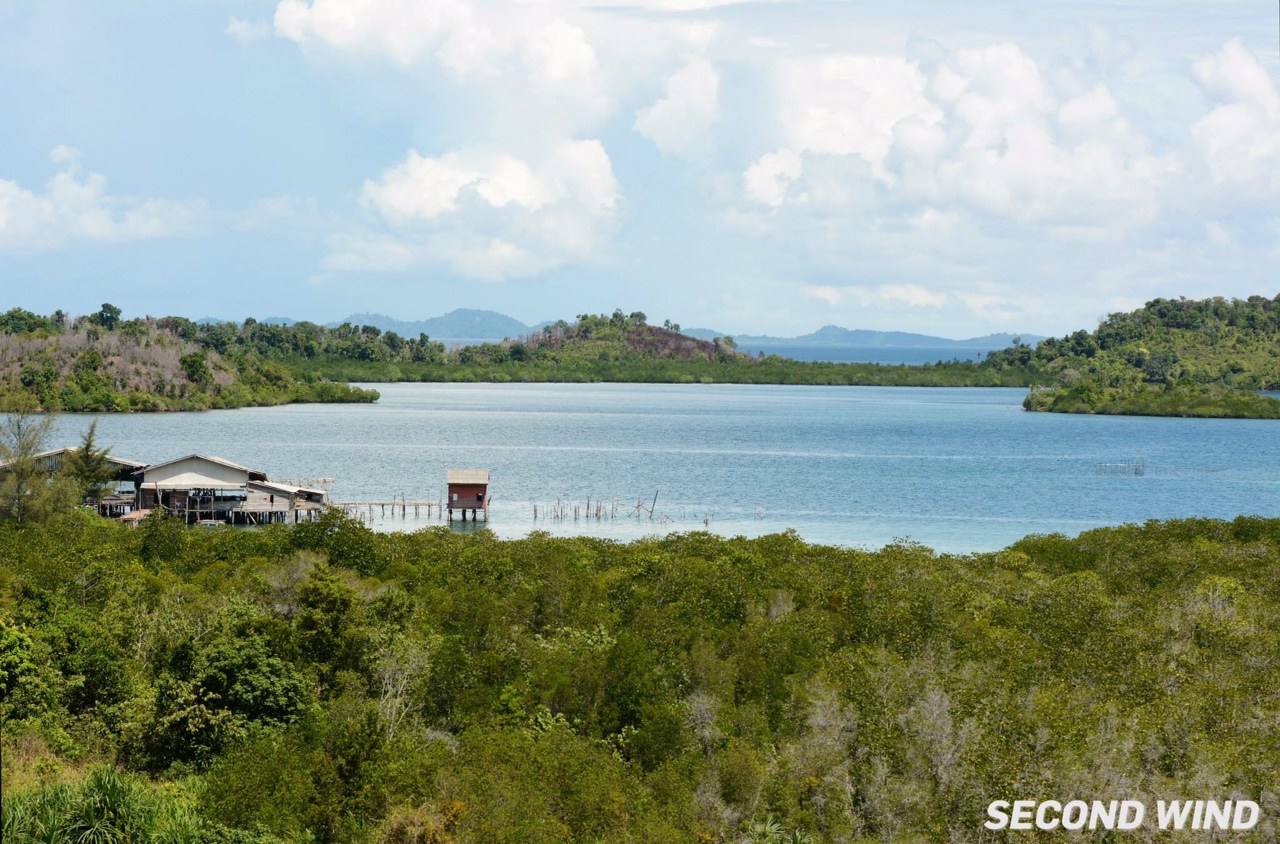 At about 73km, we came up a hill and in front of us was beautiful blue sea with a few little green islands dotted along the coast – such a gorgeous view. JZ got a good shot of it from the photographer’s motorbike!

Just before the turnaround point we saw three Cat 1 riders coming back and then a few minutes later the rest of the Cat 1 peloton. A few kilometres later a few groups of Cat 2 riders came from the same direction. There was a water tent at the turnaround and quite a sharp u-turn around a small roundabout. The Cat 3 & women’s peloton got quite strung out here. Lucklily I wasn’t too far from the front so it only took a little chasing (with the help of Stevie B) to get back up to the front. Somehow, quite soon after that I found myself at the front with Kath and Marc. That was not where I wanted to be, so at the next hill I eased off a little and let a few people overtake to put me further towards the middle of the group again (and out of the wind). Kaz was next to me at about 100km (on the other SwiftCarbon Ultravox Ti in the race) and asked how I was doing. I told him I couldn’t quite believe how good I felt! It was hot, but not too bad, my legs felt strong and the pace was still quite comfortable.

At about 120km there was a surge up a hill and I was near to the middle of the group and as we got to the brow of the hill I looked back and saw the rest of the group a long was behind. The peloton had split in two and I was at the back of the first “half”. I got too close to the back of the group going down the other side of the hill so instead of making the most of the slingshot effect to help me back up the next hills that followed immediately after I found myself having to brake at the bottom of the hill… not good. By the time we got to the top of the next hill I was about 5-10 metres behind the group and worked hard to catch up. I had just caught up when there was another surge going up a fairly gentle slope, but my legs had had to work too hard chasing so I fell back again. This time I didn’t catch up. I was on my own for about the last 10-12 km… completely on my own. I could see the front peloton until very close to the end, but I couldn’t see anyone behind at all. I ended up finishing about 4-5 minutes behind the first group (including Kath), about 10-15 minutes in front of the second group and 14 minutes before the next woman. 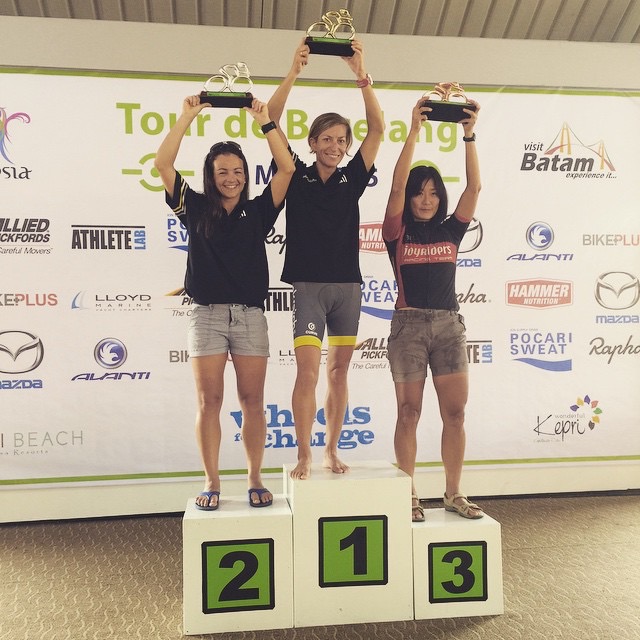 Of the 13 listed to start only 9 women finished th e race. It was a tough race, over 134km, almost 2250m of elevation with the temperature around 40°c, but I was stronger than I thought. Our team, Arrivo Primo Singapura, had a great result for the women’s race with Kath in first place and me in second.

In the run up to the race, I would have been very happy with being told that I would finish the course still on my bike and not in the broom wagon. Turns out I was fitter (or luckier) than I thought! I am absolutely sure that my triathlon training program and diet choices – training by heart rate, eating low carb, higher fat and lots of vegetables – is what meant that my base level of fitness and fuel efficiency was good for an endurance race like this one. During the race I deliberately ate food with a slightly higher fat and salt content earlier in the race and after about a third of the distance I ate bars with higher carbohydrate content and added caffeine. However, I certainly ate far, far fewer calories (about 1000) than I used (about 3500) and I’m certain that training my body to use fats for energy instead of relying on sugars really helped for this race.

The organisation was great during the race. I had plenty to drink (about 6 bottles full I think), plenty to eat and thoroughly enjoyed myself. After the race there were a few problems getting the bikes back to the ferry so we ended up leaving the port about 2 hours late. It was annoying, mainly because it meant that by the time I got home my children were already asleep so I didn’t see them for the whole day which was sad. We made the best of it though and we had a good laugh waiting on the pier, chatting about the race, comparing tan lines and it was really nice to get to know my team mates better. 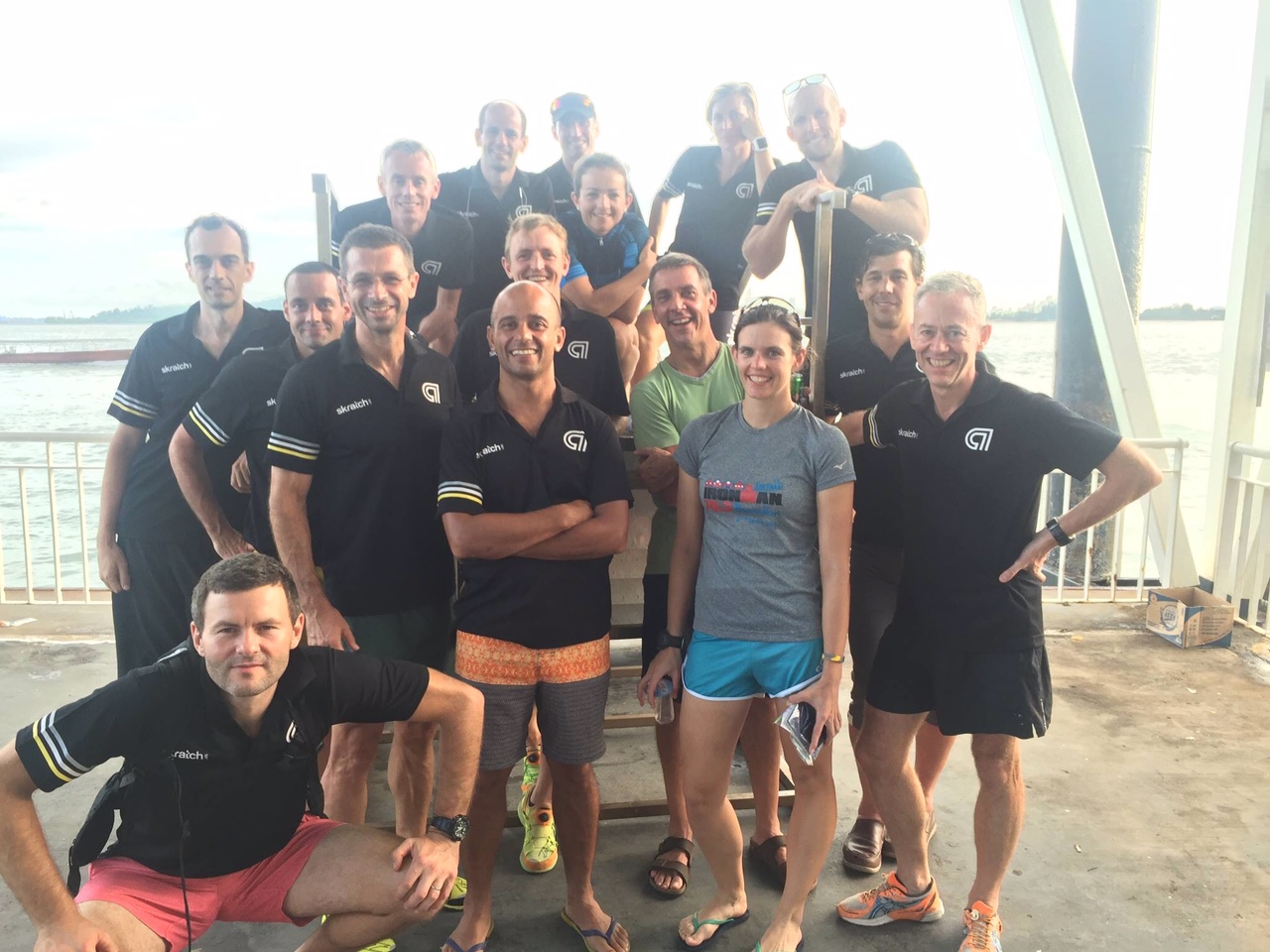 We had showers and some lunch as soon as we arrived. The lunch was OK, and something savoury was welcome after the race as were the roving beer sellers :-). After lunch was the prize presentation. The presenter mentioned during the men’s presentation that there were some nice sounding prizes… but for the women’s race there were none**. The trophy was nice, and although I came for the race and the experience, not the prizes, it was still surprising and disappointing that with so many, many race sponsors there were none.

Thanks to Second Wind Magazine and Tony Rose for the photos.

If you're interested there's a 3 hour video of the race here.

**EDIT: About a week after the race I received this voucher for a night’s stay at Turi Beach Resort as a prize. It even had a very nice hand written note on the back from Kent at Cycosports! Thank you!