The Singapore Duathlon, one of my best races last year, was supposed to be at the beginning of October, but the air was so bad due to the forest fires in Indonesia that it was postponed. A few weeks after the original date, I found out I was pregnant and when the organisers announced the new date I asked them if i could downgrade from the standard distance to the sprint (half the distance). They were very accommodating and agreed to change my race category without charge.

The sprint distance started late in the morning at 10:40, so it was likely to be hot already. I knew that I needed to be careful to stay well hydrated and not to get too hot, so the night before I put two flasks of ice cubes in the freezer and three bottles of elete electrolytes in the fridge.

I packed two pairs of Altra running shoes (Intuition and 3Sums), sunglasses, Oofus recovery shoes, a spare tire and CO2 cannister. My bike was ready with tires a little softer than usual, brakes checked and precisely adjusted, shoes and my Tri Eolus helmet.

In the morning we went to school with the boys to do their practice race for the "kids' dash" they're doing next week. I looked pretty silly in my tri-suit and aero helmet! We warmed up with them and then helped the kids run their 750 metres. After a quick warm down I cycled the 6km or so to the start of the race.

I saw a few of my APS team mates finishing the standard distance in fine form while I was waiting for my start. After setting up my transition I stayed in the shade and kept sipping cold water and electrolytes. I started my heart rate monitor a few minutes before the start, gave my husband my ice flasks and asked him to stand with the boys in the shade about half way between aid stations... and then we were off!

I started about half way back in the pack and went of at a nice, steady pace keeping my heart rate in my steady zone (aka zone 2). At every aid station I tipped cold water on myself and drank the cold Pure electrolyte drink that the race was providing. I passed my family twice on the first run and they gave me plenty of ice which I put down the front and the back of my sports bra. The run was quite enjoyable but it was quite frustrating to see so many people in front of me who usually would not have been. I nagged/ encouraged quite a few people on the last run of the standard distance to keep pushing and finish strong, including a man named John with whom I ran for about 400m. We had a nice little chat!

T1 was good, fast and smooth and the 3 laps of the bike course went well. It was not crowded as I had feared and most of the bike course was shaded. I felt like i was keeping a decent speed but not putting in too much effort - my bike felt easy to ride fast and I spent the whole time passing people. I was very careful, taking corners slowly and passing wide (or waiting) - despite this I still had the second fastest bike split! My aero helmet was very comfortable, the visor lets in plenty of air to my face and the vents meant that my head was cool. In 18km I drank 700ml of elete electrolyte mix which meant I went out onto the second run very well hydrated.

T2 was also pretty good too. I slowed down well before the dismount line and jogged back to the rack, 3sums and Julbo tracks went on fast and I went out slowly onto the run course. My heart rate had jumped up a little bit during the run into transition pushing my bike so i tried hard to get it back down again quickly.

A short way into the second run, a lady named Kat overtook me. She would be the only person to pass me between getting on my bike and the race finish. I saw her again at the end and we talked a lot about racing and living in Singapore.

I poured ice into my kit again when I saw my family and continued to keep my heart rate in check. 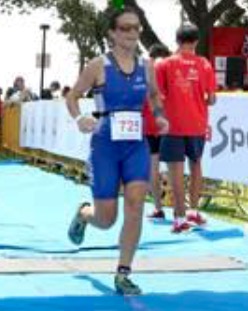 The finish line came quickly and I felt good by the end of the race.

It was nice to change shoes to recovery slippers though!

After collecting my bike and kit from transition, having a chat with young Tristen Tan, drinking plenty and cooling down we all cycled home slowly together in the park.