For any triathlete worth their 70.3 miles, Las Vegas would likely mean something...

This post is not about the Ironman 70.3 world championship at Lake Las Vegas. Sorry... It's about making fancy dress costumes, multi-tasking and getting up early the day after a party.

A couple of weeks ago we received an invitation to a Las Vegas themed costume party. The invitation was from my boss. I asked a few friends if they had any ideas of what I could go dressed as. Many, including my mother, said "hooker". Not quite sure which part of "I work for a bank and it's my boss's party" they didn't hear...! The next most common suggestion was a rather uninspiring "croupier"...
The Monday before the party I came home from work and saw a huge metallic cube on the dining table. My first thought was that the oven had broken and that my husband had taken it out of the kitchen to see if he could repair it. It wasn't the oven. It was a polystyrene/ styrofoam box with head holes and arm holes, covered in aluminium foil. Hubby suggested I try it on. I suggested otherwise. For the next four days, we - including the children - spent a lot of time creating a slot machine, including buttons, flashing lights, a lever and painting "JªCKPOT" in bright yellow letters which left yellow streaks on the floor for the next five days.
We eventually decided to make a "Lady Luck" costume for me. While I was at work that week, my mum very kindly sewed lots of three card 'poker hands' all over a black dress, she made me a sparkly red hem around the bottom of the dress and a head dress with the same red sparkles and some more poker hands.
On the evening of the party, we arrived home from a day out with the children at about 18:30. They immediately sat down for dinner. Husband had a 5 minute shower while they were eating and I changed one of the worn out tires on my TT bike to a new Maxxis Campione. 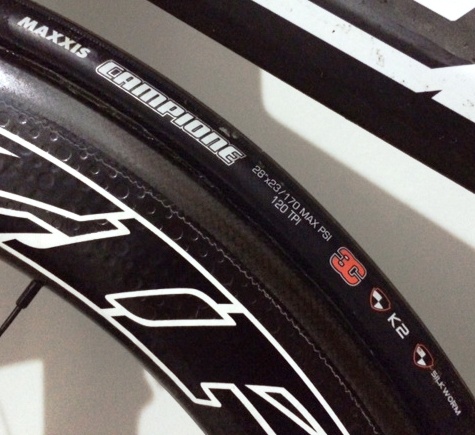 Once the boys had finished eating we went up for their bath; I joined in, got clean and then ran off to put a bit of make up on while they read a book with Daddy. I changed the second tire, in my underwear, as soon as my youngest son was in bed. In the 15 minutes that followed, I prepared two bike bottles for the Sunday morning ride, pumped up the second tire, found a pair of suitable shoes, found a bag, called a taxi, did my hair, got dressed, put the shoes on, posed for a photo and kissed our eldest son goodnight as we left him with Grandma. 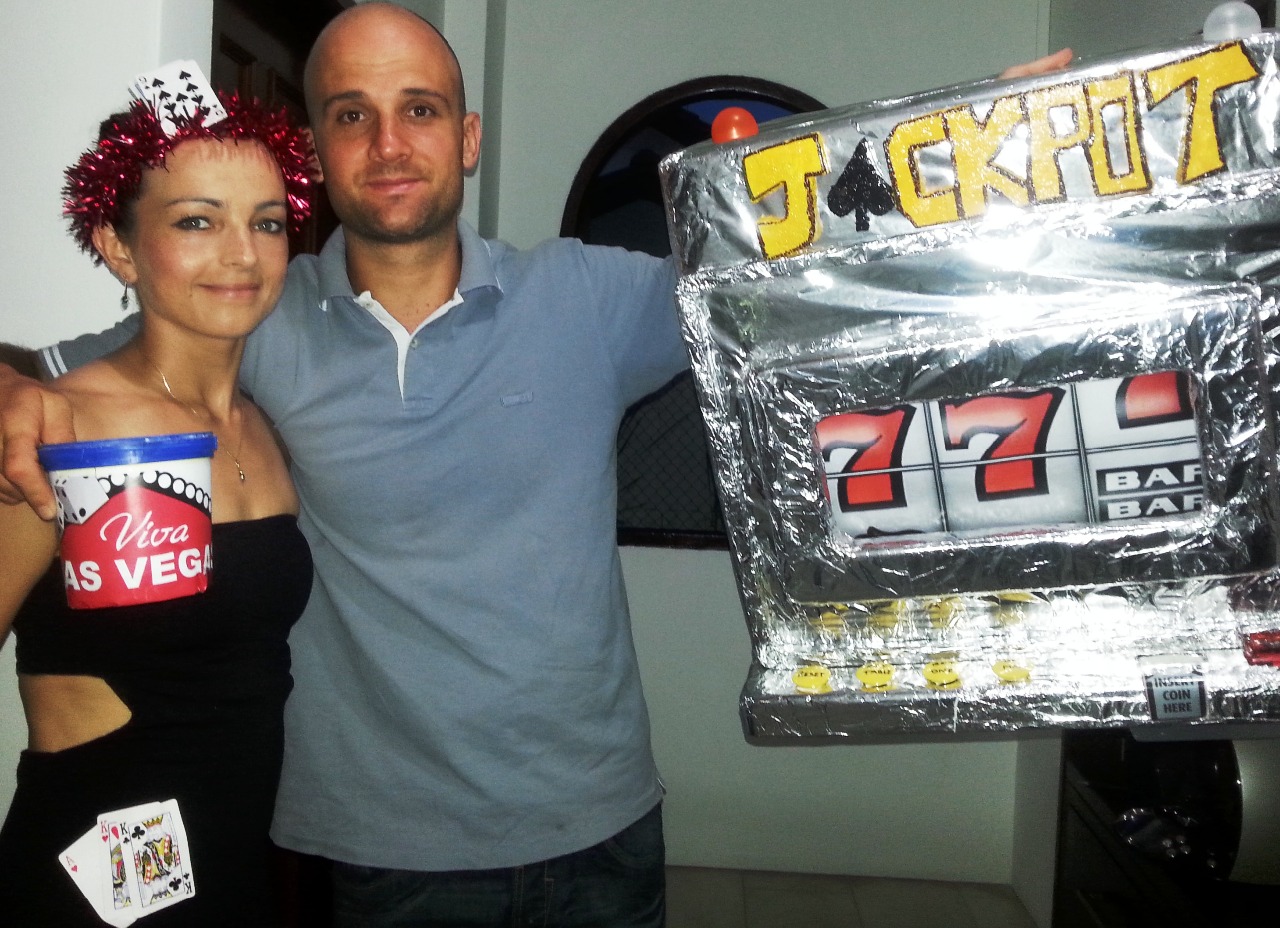 We had a really nice time at the party. It was great to see so many colleagues, including my boss, his wife and son making so much effort with such fantastic costumes. There were all sorts, even some quite daring/ revealing! The setting was amazing, complete with a beautiful house and garden, music, but, most importantly, a margarita machine! The slot machine costume (coupled with an enormous black, curly wig) was a little warm. After about 22:00 it was removed and parked discretely on the patio. It got lots of comments, and the kids loved putting the chocolate coins we had brought with us into the slot, pressing the flashing buttons and pulling the 'arm'. 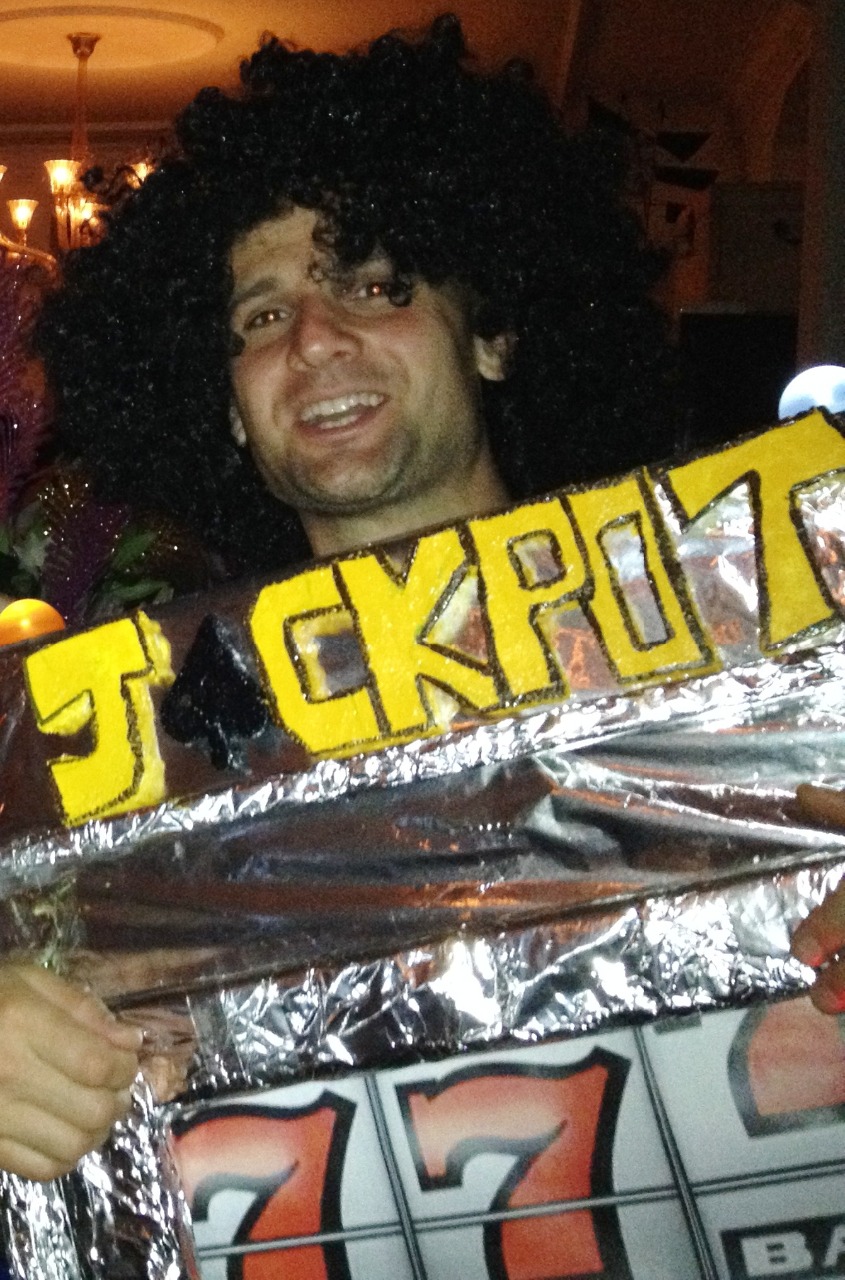 I made us leave just after 23:30 as I wanted to get in at least a few hours sleep before my alarm went off. At 5:15 the next morning I was certainly glad I had...